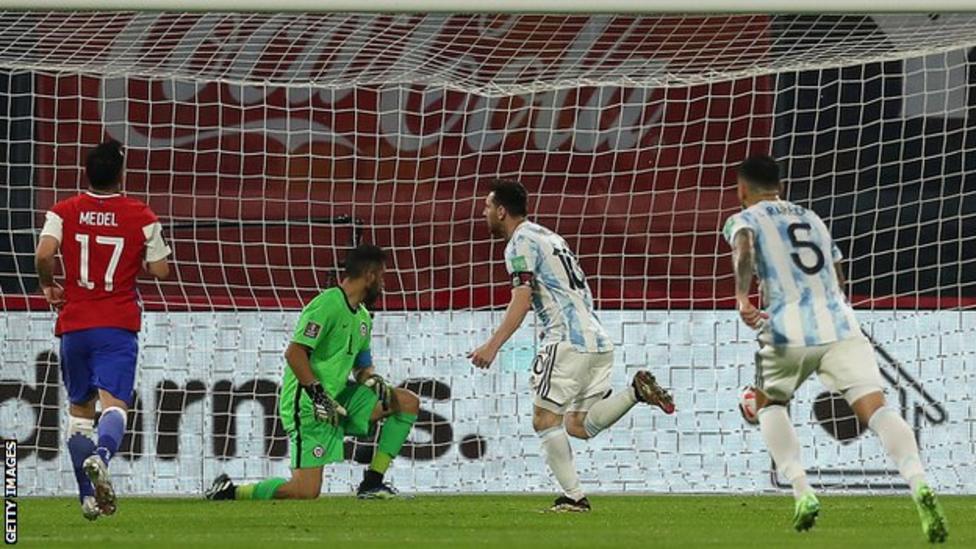 (BBC) Lionel Messi said Argentina’s World Cup qualifying draw against Chile was “special” as it was the first since the death of their legendary former captain Diego Maradona.

Maradona died at the age of 60 after suffering a heart attack in November.

Messi opened the scoring with a penalty but Alexis Sanchez’s equaliser meant Argentina missed the chance to climb above Brazil and go top of the table.
“It was a special match given it was the first without Diego,” said Messi.
Argentina have not played for more than six months after two matchdays were postponed in March because of the coronavirus pandemic.

The Barcelona striker put Argentina ahead from the penalty spot on 24 minutes in Santiago del Estero after Lautaro Martinez had been fouled by Guillermo Maripan in the box.

The draw means Argentina stay second and a point behind leaders Brazil, who will look to maintain their perfect qualifying record when they host Ecuador on Friday. Chile are sixth after winning just one of their opening five matches.
In Thursday’s other South American qualifiers, Everton defender Yerry Mina was among the scorers as Colombia beat Peru 3-0 in Lima.

Mateus Uribe and Luis Diaz were also on target for Colombia, who had lost their previous two qualifiers by an aggregate score of 9-1.

Uruguay, who were without the suspended Edinson Cavani, were held to a goalless draw by Paraguay in Montevideo, while Bolivia climbed off the bottom of the table with a 3-1 win over Venezuela in La Paz.
Another round of World Cup qualifiers follows on Tuesday and Wednesday before the Copa America begins in Brazil on 13 June – a tournament you can watch live on the BBC.

Lakers go out in play-offs first round

Fri Jun 4 , 2021
Support Village Voice News With a Donation of Your Choice. (BBC) Reigning NBA champions, the Los Angeles Lakers have suffered a shock first round play-offs defeat to the Phoenix Suns. Devin Booker scored 47 points for the Suns as they sealed a 4-2 series win. LeBron James scored 29 points for the Lakers, who are the first defending champions to lose […]