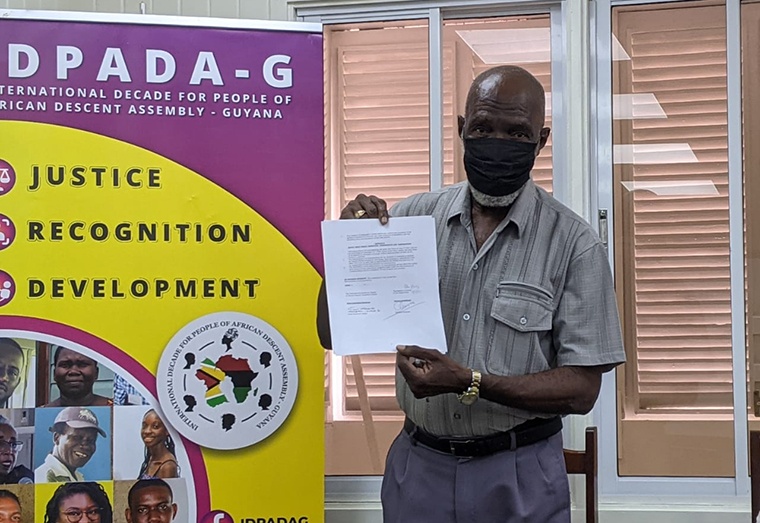 A Memorandum of Understanding was signed on Wednesday, between the International Decade for People of African Descent – Guyana (IDPADA-G) and the National Archives of the Netherlands (NAN) to foster a relationship that allows for access to historical documentation, among other things.

At the short, intimate signing ceremony, Chairman of IDPADA-G, Vincent Alexander said that the cooperation established, is a momentous achievement, since it will provide a wealth of knowledge to better mould and shape the cultural heritage of the people of Guyana.

Alexander said that the MoU was inspired by the book ‘Blood on the River’, written by Professor Marjoleine Kars which sought to speak to the 1763 Revolt “in a manner in which other books have not done.”

NAN holds the records of over 900 interrogations of Africans who were involved in the Berbice revolution.

“…The author was able to visit the Dutch archives and translate much of the information… What she wrote about, had a lot to do with actual interviews with participants of all sides of that Revolt. So that inspired a thought that there is so much more that could be learned or had from the National Archives of the Netherlands in relation to the history of the people of Guyana and the African presence in Guyana. And so that inspired us to make contact with the archives, in pursuit to make more information available to the world at large and to us in Guyana in particular, about our own history and about our heritage,” Alexander remarked.

He noted too that this cooperation, from the standpoint of recognition, will allow the people of African Descent in Guyana, to establish greater, their identity, authenticity, and confidence to project themselves to acquire recognition, as is outlined in the decade.

Chief Librarian at the University of Guyana, Gwyneth George said that documents that will be acquired, will be available in the three main units (National Archives, National Library and UG’s Library) and they will also be digitised.

George said that this cooperation is especially important since Guyana was occupied by the Dutch for some period and a lot of that aspect of the country’s history is not known, especially since the documentation’s language posed a barrier.

But with this MoU, the people of Guyana will be able to access translated facts about their history.

“It is sad that we as a nation do not understand where we came from, and what has moulded us to be who we are today. And that is because quite a lot of our information is buried in the British archives, in the dutch archives and maybe even in France, who occupied us very briefly but made an impression on our nation. If you studied history you would understand that quite a lot of our history was written from our colonial masters point of view. The new historians who have emerged now are trying to reinterpret that history to point out a different point of view to our nation. Many of them are aging so it is up to us to foster a new generation of children who would understand that we have to go and find the information wherever it is, to understand who we are and where we came from,” George alluded.

The information that will now be accessible, she said, will help the people of Guyana, particularly those of African descent, to analyse their history “in a more solid and real way.””

Thu Jun 3 , 2021
Support Village Voice News With a Donation of Your Choice. ExxonMobil Guyana has made a contribution of more than GY$10M to the Civil Defence Commission in support of flood relief efforts across Guyana. President of ExxonMobil Guyana, Alistair Routledge, handed over the cheque to Director General of the CDC Lt. Col. Kester Craig at their headquarters on Wednesday. “The magnitude […]