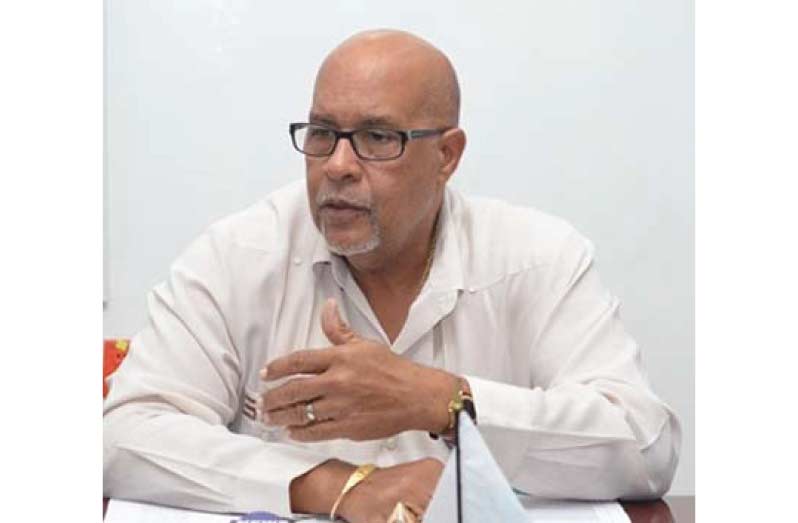 Former Chief Executive Officer (CEO) of Guyana Water Incorporated (GWI), Dr. Richard Van-West Charles has made a compassionate plea for the water company, under the current management of Sheik Baksh, to reconsider its decision to fire its workers.

Initially, GWI had signaled its intention to fire approximately 300 employees, but in a statement on Wednesday, it clarified that that under the Termination of Employment and Severance Pay Act, a total of 157 staff are listed to be dismissed. According to GWI, the move is part of its restructuring plans and rationalisation of the staffing establishment. Of the 157, 76 employees were issued termination letters on Monday, May 31, 2021 and will go off on June 30. The remainder of staff is slated to be sent off within a three-month period.

“I joined with our Parliamentarian Annette Ferguson, my colleague and comrade, to call on the company to rethink this situation, be mature and say that you made a mistake and you will reinstate these workers, and seek to grow and protect us from the situation with COVID,” Dr. Van-West Charles said during a People’s National Congress/Reform (PNR/C) press conference on Thursday morning.

Dr. Van-West Charles, who addressed the press alongside Opposition Member of Parliament Annette Ferguson, said the records show that pre-2015, GWI, under People’s Progressive Party/Civic (PPP/C) Administration had outsourced a large portion of its work, when the very work could have been done by the staff of the company.

“When we [the coalition] came into office, we met a series of wells with carbon steel casings that were eroded; 11 out of the 18 were rehabilitated with in house staff. With in-house staff, GWI rehabilitated 81 wells over the four years; the overhead tank was brought back but without the staff walking throughout LBI looking for the leakages, the breakages, which compromised not only the pressure but compromised that the water company that is available; we were able to bring that overhead tank back,” Dr Van-West Charles said as he referenced to instances in which GWI, under his stewardship utilise**d its staff to execute projects.

He said prior to the A Partnership for National Unity + Alliance For Change (APNU+AFC) taking office in 2015, GWI, under Baksh’s leadership had done the total opposite.

He said there is clearly a vast difference between the PPP/C Administration and the A Partnership for National Unity + Alliance For Change (APNU+AFC) Administration, with the former (PPP/C) fixated on outsourcing works to “friends and family” while the latter (coalition) focused on building the company.

Dr. Van-West Charles said the financial records of the company paint a vivid picture of the situation as he referenced to a 2015 findings.

“When they said that their payroll was $96M, that was inaccurate, because they are not taking into consideration that contractors that they had [accounted for] over $150M. And then they paid over $10M per annum for backhoe’s rentals, and over $30M per annum for cranes. When I got there, they had no cranes, so you had to rent a crane,” the former CEO said, noting that at the time there was 84 contractors in the country.

He noted that GWI, under his watch, not only improved its services, but also its operations by investing in equipment and building human resource capacity. He said staff were brought onboard to address leak repair and maintenance of equipment, well maintenance and vehicle servicing among others. He said in 2015 there were one backhoe, one bobcat and one 2 ton Hiab truck in the country.

“When we left there were four backhoes, one mini excavator, one dump truck, one crane, two Hiab trucks, a crane lowbed, a water tanker. In terms of well maintenance, there was one compressor, we now have two drill rigs plus a specific vehicle for well maintenance, two compressors, and as I said, despite they have issued a contract to someone in Black Bush Polder to do maintenance of a well at Yakusari for $9M,” Dr. Van-West Charles pointed out.

He was keen on pointing out that prior to 2018, well maintenance accounted for $55M, however by 2018, all of the maintenance services were done in house.

Dr. Van-West Charles expressed fear that the firing of staff will compromise the quality of service being offered by GWI. He noted that it was under the coalition government that there was increased level of service as well as increase hours of distribution and supply from 12 hours to 95% with 24hrs supply. Notably, between 2015 and 2019, 95, 756 households had received water for the very first time.

UNCONSCIONABLE
Ferguson, who served as Minister of Communities with responsibility for Housing and Water before demitting Office in 2020, said that the decision by GWI’s Management is unconscionable.

In condemning the firing of the staff, Ferguson said that GWI’s Management failed to consult with the workers’ representatives on the restructuring plan.

“How can management wake up in days and decide to terminate the services of innocent staff? This act, I could only describe as spiteful, vindictive, and discriminatory against Guyanese, predominately Afro-Guyanese,” Ferguson said as she spoke on behalf of the PNC/R.

He said though President Irfaan Ali had vowed to act professionally, his Administration has continued its witch hunting exercise. She said PPP/C entered office in August 2020, thousands of young professionals, predominantly Afro-Guyanese are now on the breadline.

Like Dr. Van-West Charles, Ferguson called on GWI to rethink its decision.

Thu Jun 3 , 2021
Support Village Voice News With a Donation of Your Choice. …maintains Section 22 unconstitutional  The A Partnership for National Unity + Alliance For Change (APNU+AFC) has appealed Chief Justice Roxane George’s decision that there is nothing unconstitutional about Section 22 of the Election Laws (Amendment) Act and Order 60 (Recount Order), which were relied upon by the Guyana Elections Commission […]