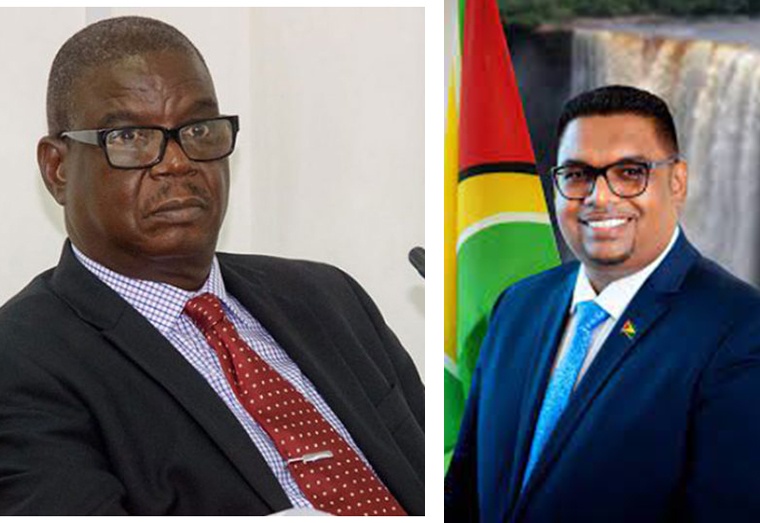 …accuses President of trying to get his ” people” promoted, got angry after being rebuffed

By Svetlana Marshall
Chairman of the Police Service Commission and Assistant Commissioner of Police (Ret’d), Paul Slowe said, in breach of the Constitution, President Irfaan Ali had lobbied for a number of police officers to be promoted, among them, Senior Superintendents Fazil Karimbaksh and Calvin Brutus, and when his demands were not met, he became irate.

“He [the President] wanted to know why ‘his people’ Brutus and Karimbaksh were not on the shortlist…It was a rough conversation, raised voice, very angry and then the conservation was terminated, the president terminated the conversation,” Slowe said as he detailed aspects of a conversation he and the President had on December 23, 2020, hours after the Police Service Commission had shortlisted a number of senior officers of the Guyana Police Force for promotion.

But President Ali has denied the allegation that he attempted to influence the Commission to promote “his people.” “This is not only far from the truth, but it is a malicious attempt to change the narrative,” President Ali said in a statement.
On May 19, Slowe and Conway along with seven others were charged with conspiracy to defraud the Guyana Police Force of approximately $10M, but on Monday, Slowe made it clear that all charges made against him, including the allegation that he sexually assaulted a female officer of the force, are false and politically motivated.

In his defense, Slowe, who has served the Guyana Police Force for 37 years, detailed in chronological order the events that unfolded from August, 2020 when the Commission received directives that certain “preferred senior officers be placed in key positions” to May 19, 2021, when the charges were laid against him and others.

According to Slowe, on September 16, 2020, he was subjected to a meeting with President Irfaan Ali, during which the Head of State attempted to persuade him that Brutus and Karimbaksh along with at least three others be promoted.

However, Slowe said he reminded the President that senior officers of the Force are not only promoted based on the recommendations from the Guyana Police Force, but based on the approval of the entire Police Service Commission, and not a single individual. President Ali was also reportedly informed that officers such as Brutus and Karimbaksh, who have disciplinary matters pending, are not eligible for promotion.

Slowe said one day after, on September 16, 2020, he received a called from one of his friends, Mohamed Qualender, requesting a meeting. The two reportedly met at a café on Middle Street, Georgetown, and it was during that meeting that Qualender indicated that the Attorney General and Minister of Legal Affairs, Anil Nandlall and Vice President Bharrat Jagdeo wanted to meet with him in his capacity as Chairman of the Police Service Commission.

He said it was not long after that the Police Service Commission received a document from Assistant Commissioner of Police Edgar Thomas recommending that a number of ranks from the Presidential Guard be given acting appointments but the recommendation was rejected by the Commission on the basis that Thomas had breached the Standard Operating Procedures (SOPs).

Slowe said the very day, he received a call from the President. “He told me among other things that I was a bit harsh on Thomas, and that he, the President, had instructed Thomas to write to the Commission,” Slowe recalled.

During that time, Karimbaksh had moved to the High Court to challenge a move by the Police Service Commission to institute two disciplinary charges against him, to do with sexual harassment.

That aside, Slowe noted that it was on December 23, 2020 that the Police Service Commission met to consider ranks for promotion based on recommendations made by the Guyana Police Force.

He said after conducting its due diligence, the Commission shortlisted a number of persons for promotion but Brutus and Karimbaksh were excluded. He said hours after, on the night of December 23, 2020, he received another phone call from President Ali, during which the President appeared “agitated.”

“That conversation did not go very well because he sounded very agitated, irate over the fact that Brutus and Karimbaksh were not on the shortlist…,” Slowe recalled.

He added: “He [the President] wanted to know why ‘his people’ Brutus and Karimbaksh were not on the shortlist.”
Slowe said he subsequently informed the other members of the Commission about his “unpleasant” encounter with President Ali.

By December 24, 2020, Minister of Home Affairs, Robeson Benn had directed the Commissioner of Police Nigel Hoppie to institute charges against a number of senior officers for alleged misconduct during the electoral impasse and the investigation of the Henry Cousins’ murders.

Slowe said the intention was to disqualify those officers for any promotion by the Commission.
By December 31, 2020, Brutus moved to the Court, challenging his omission from the list shortlisted for promotion. The matter is currently before Chief Justice Roxane George and a decision is expected in June.

He noted, however, that the decision was expected to be handed down on May 24, and it was against that background that the “trumped up” charges were laid against him and Conway on May 19. He said the intention is to dismantle the Commission before the Court gives its ruling on the promotion. Both Slowe and Conway have vowed to take legal actions against the state for the “false” allegations made against them.

However, hours after Slowe’s presser, President Ali issued a statement denying that he attempted to influence the Police Service Commission to promote police officers that are aligned with the People’s Progressive Party/Civic (PPP/C) Government.

According to him, the meeting with Slowe was nothing out of the ordinary. “Mr Slowe, like other independent commissioners, the judiciary, and I had a meeting. At that meeting, I raised various concerns with him that were brought to my attention without prejudice,” the Head of State said.

According to him, it is his desire as President to see the Commissions function professionally and independently. According to the President it is Slowe who is bringing into disrepute the name of the Police Service Commission.
“If Mr Slowe is saying I tried to influence him, where are the results of that influence? Where is the result? It is clear as day that Mr Slowe is bringing the independence and professionalism of the PSC into question when he aligns the PSC with opposition member of Parliament Ganesh Mahipaul and retain Opposition members of Parliament Roysdale Forde, Khemraj Ramjattan, Raphael Trotman, Geeta Chandan-Edmond, Amanda Walton Desir to institute proceedings against the Government of Guyana.

This action of Mr Slowe is what he should explain. How can an independent commissioner align himself with a political party and a political party member’s action against the government? Where is the independence? It is therefore not only opportunistic but a total lie that my meeting with Mr Slowe was to exercise any influence.

This level of distortion and public mischief by the Chairman of this Commission exposes his leadership and alignment. My meeting with Mr Slowe was within the first few months of my Presidency, more than eight months ago; the question is, why only now? I guess his unprofessional exposure and links are making him desperate.”

Mon May 31 , 2021
Support Village Voice News With a Donation of Your Choice. …detailed his challenging but worthwhile life in 2020 interview …said when life threw him barriers he chose to be better rather than bitter By Lisa Hamilton On Monday, Minister of Health, Dr. Frank Anthony confirmed the death of former journalist, Mondale Smith as a result of COVID-19. Smith was admitted […]