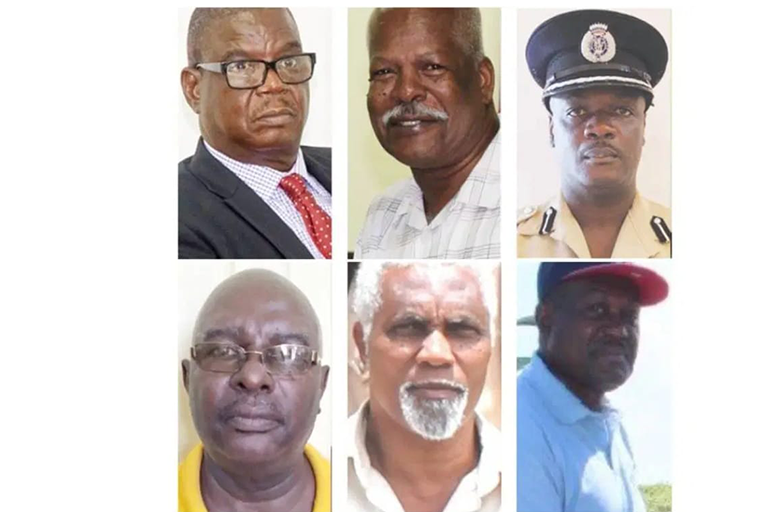 Retired Assistant Commissioner of Police, Clinton Conway was among seven current and retired senior police officers, who appeared before the Georgetown Magistrates’ Court, on Thursday, charged with conspiracy to defraud and misconduct in public office.

Chairman of the Police Service Commission, a former Assistant Commissioner of Police, Paul Slowe; and Senior Superintendent (ag) Marcelene Washington were also named as accomplices in the court documents, however, they were not present in Court on Thursday.

The men were placed on $100,000 on each charge.
According to the police, the money was allegedly paid to Slowe, Conway, Whittaker, Fraser and Gilbert to facilitate a review of the Guyana Police Force’s Standing Orders, however, proper procedures were not followed. It was stated too that the Standing Orders were already reviewed by the Strategic Planning Unit of the Guyana Police Force between July 2018 and March 2019.

Sutton was also charged with misconduct in public office. It is alleged that while performing duties as Finance Officer within the Force, he falsely signed seven payment vouchers, though he was not authorised to do so, enabling Slowe, Conway, Whittaker, Fraser and Gilbert to be paid $1.776M.

Outside of the Court, Daren Wade, who was among a battery of lawyers representing the senior retired and current police officers, said the prosecutor was unable to state clear what procedures were breached.

“My understanding of the law is that if you are going to charge a person, you must understand the particulars of the charge,” Wade said.

He told reporters that the charges are another attempt to harassment men and women who would have served Guyana with distinction.
The A Partnership for National Unity + Alliance For Change (APNU+AFC) on Wednesday evening, expressed outraged at the continuation and intensification of what it described as a campaign of “vulgar political persecution of professionals in Guyana.”

It said the charges laid against the retired and current senior officers are frightening and chilling developments which signal, beyond debate, that Guyana has sunken into a state of naked dictatorship.

“The charges are spurious, vexatious and without merit or basis. They are trumped up and designed to intimidate these former senior police officers who have been executing their work as Chairman and members of the PSC with the highest degree of professionalism and integrity,” the APNU+AFC Coalition said.

It added: “The PPP is clearly now attempting to tarnish their impeccable reputations and dismantle the professionally constituted PSC to install their cronies, who will in turn, do their bidding and promote pliant and favoured officers to the hierarchy of the Police Force. The PPP is hell bent on completely eroding all vestiges of professionalism within the Guyana Police Force and completely render it into a political weapon to target and persecute political opponents and the citizens of Guyana who oppose their authoritarianism.”

The coalition said the PPP/C, in keeping with its “modus operandi” is to destroy constitutional and other institutions and to install their own cronies who will execute their political directives and bidding.

Thu May 20 , 2021
Support Village Voice News With a Donation of Your Choice. A Guyana Geology and Mines Commission (GGMC) prosecutor was reportedly caught receiving $300,000 from a gold miner to dismiss a case that dates back to 2019. GMMC prosecutor, who has been identified as 44-year-old Sherwin Crandon of George Street, Werk-en-Rust, is currently in police custody. In a press statement on […]