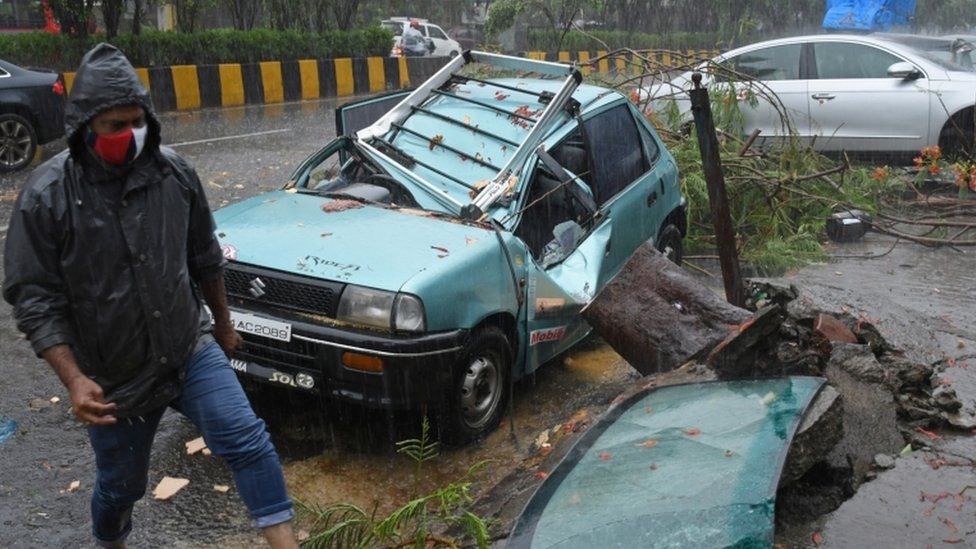 (BBC) A cyclone, classified as “extremely severe”, has made landfall in India’s western state of Gujarat with wind speeds of up to 160km/h (100mph).

Cyclone Tauktae travelled along India’s western coast, narrowly missing the city of Mumbai. At least 12 people were killed and 150,000 evacuated.

The navy has sent three warships to try to rescue hundreds of people stranded off the coast in two barges.

The cyclone comes amid a Covid-19 wave that has overwhelmed Indian hospitals.

Late on Monday local time, India’s meteorological department announced that the “extremely severe cyclonic storm” had begun to make landfall in Gujarat. It took several hours for the eye of the cyclone to come ashore.

Winds were gusting up to 185km/h, the weather bureau added, and storm surges up to 4m (13ft) high were possible in some coastal districts. Tauktae is the strongest cyclone to strike the region since 1998 and both Gujarat and neighbouring Maharashtra have been on high alert. Although Covid cases are declining in both states, the devastating effects of India’s second wave are still being felt.

What’s happening with the boat rescue?

The Indian navy has been taking part in rescue operations to save the people on both of the commercial barges, which are off the coast of Mumbai, the capital of Maharashtra. There were 400 people on board in total, but 38 have been rescued, the navy said in a Saturday evening update. It said it was responding to two separate requests for help in extremely challenging conditions: one from a barge adrift near an oil field about 170km from the coast, and a second from another vessel about 14km from the coast.

What precautions did the states take?

More than 150,000 people in low-lying areas have already been moved to shelters, sparking fears of possible new coronavirus clusters in coming weeks. And the federal government has also ordered the vaccine drive to be halted in several coastal towns believed to be at risk. The storm is also adding to the challenge facing India’s hospitals. Mumbai has already moved 580 Covid positive patients from dedicated centres to civic hospitals as a precaution.

Officials have advised people to stay indoors, amid anticipation of flooded roads, damaged power lines and uprooted trees. Thousands of fishing boats have returned to harbour, and hundreds of merchant ships have been asked to re-route.

Teams from the National Disaster Response Force (NDRF) have been deployed in both states. Rains from the storm killed six people in Kerala, Karnataka and Goa over the weekend as the cyclone moved along the western coastline. Another six were reported killed in Maharashtra state on Monday. Houses were destroyed and electricity was disrupted across several districts in these states. The cyclone in the region in 1998 – designated 03A – killed at least 4,000 people, although the toll may have been far higher.

Tue May 18 , 2021
Support Village Voice News With a Donation of Your Choice. (BBC) The UN, US and UK have called for more protection for the civilians caught in intense violence between Israel and Palestinian militants. Footage of children being pulled from the rubble in Gaza and people running for shelter in Israel have sparked international alarm. The conflict is now in its […]