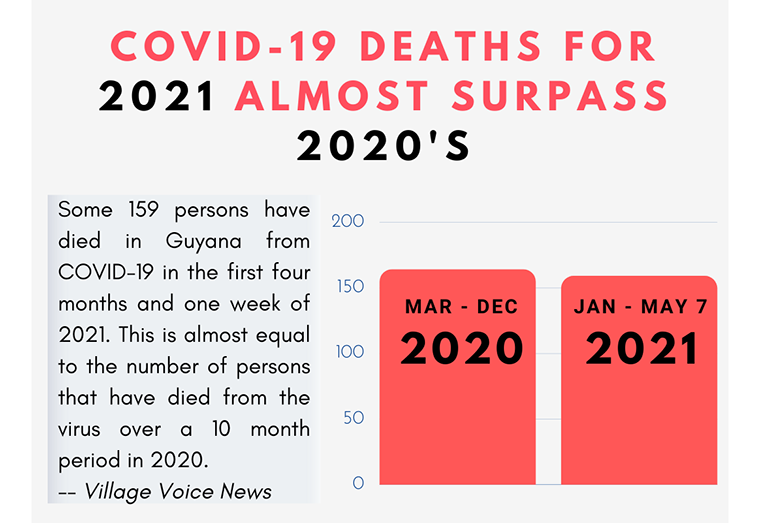 Some 159 persons have died in Guyana from COVID-19 in the first four months and one week of 2021. This is almost equal to the number of persons that have died from the virus over a 10-month period in 2020.

While the first 7 days of April shocked many Guyanese as a total of 19 deaths were recorded, the first 7 days of May have now surpassed this number standing at 24, an increase of five more deaths. As many as 5 deaths occurred on May 2 and 6 individually.

For the year, more males than females have died. While 61 females died, 98 males died. On a global scale, more men are also dying than women. There are many factors being considered that may have led to this reality. This includes men perhaps being more likely to be exposed to the virus due to social factors; a disproportionately male workforce which could place more men in contact with infected people; or men’s lungs being more vulnerable because they were more likely to smoke globally.

Mon May 10 , 2021
Support Village Voice News With a Donation of Your Choice. The New Guyana Marketing Corporation’s (New GMC) extension arm will soon benefit from 13 new motorcycles and three all-terrain vehicles (ATVs) to better advance its extension services across the country. Minister of Agriculture,  Zulfikar Mustapha made this disclosure after the agency signed three contracts last week for the supply of […]