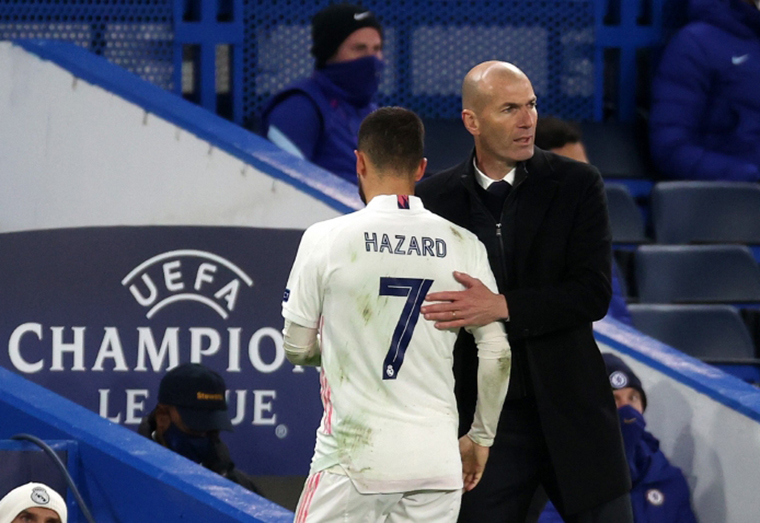 (SportsMax) A gripping LaLiga title race should be all Real Madrid need to pick themselves up from their Champions League semi-final loss to Chelsea, according to Zinedine Zidane.

Madrid head coach Zidane conceded his team were beaten by the better side after goals from Timo Werner and Mason Mount gave Chelsea a 2-0 win at Stamford Bridge, sending them through 3-1 on aggregate to an all-English final against Manchester City at the end of this month.

Los Blancos looked a shadow of the side that won three consecutive European crowns under Zidane between 2016-2018, but the France great insisted he was proud of his players’ endeavours on Wednesday.

Now they face up to a LaLiga battle, where they are level on points with Barcelona and two points behind leaders Atletico Madrid with four games remaining. Barca and Atleti face one another this weekend.

“We have spoken on this many times this season. It has been a year with many injuries, ups and downs, and that’s what we have dealt this year,” Zidane told a post-match news conference midweek.

“Despite it all, we have done good things in this Champions League in order to reach this stage.
“I think we deserved it and we were only one step from the final, but we have to congratulate this team [Chelsea], who has been better tonight.

“It doesn’t change anything. I am very pleased and very proud and now it is the time to rest and be focused on the last four games in LaLiga.”

Captain Sergio Ramos and Ferland Mendy were passed fit to start for Madrid and struggled to find top gear, although Zidane insisted he had no regrets over the selections.

“If my players have played it’s because they were ready for the 90 minutes,” he said.
“Ramos and Mendy were ready to play, that’s why I put them on. It was a semi-final and they were ready.”
Another man recently back to fitness, Eden Hazard, lasted 89 minutes but had minimal impact against his former club.
After the match, images of Hazard congratulating his old Chelsea team-mates played very badly in Madrid, but Zidane urged patience with the €100million forward.

“Eden needs to play regularly and get his confidence back,” he added. “And you get that slowly and playing games.
“So, we need to get back Eden and it will be possible playing games.”

Covid: US backs waiver on vaccine patents to boost supply

Thu May 6 , 2021
Support Village Voice News With a Donation of Your Choice. (BBC News) The US has thrown its support behind a move at the World Trade Organization (WTO) to temporarily lift patent protection for coronavirus vaccines. India and South Africa proposed the plan, which they said would increase vaccine production around the world. But drugs manufacturers argue it may not have […]