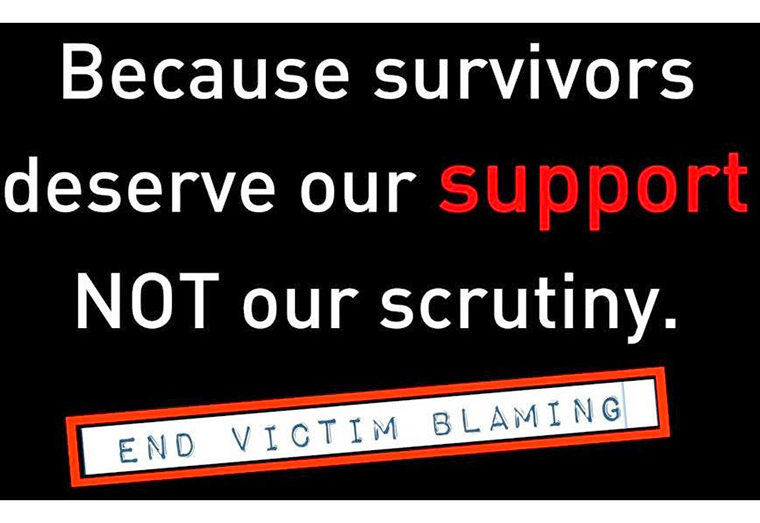 Blaming victims for a crime someone else committed towards them, has to be one of the most insensitive responses to a serious situation. I could never understand why people find it fit to hold victims accountable for their own abuse or death. This has been an issue in our society.

The recent discovery of the missing Linden woman who was found murdered in her boyfriend’s yard, brings nothing but chills and agony. Losing that young woman was tough, but also having to read insensitive comments of people blaming her for her own death because she was in love with a man who was accused of a drug related crime, is downright an obtuse way to look at it. All of a sudden everyone turned psychologists and conspiracy theorists within hours.

I was also stuck in a debate trying to explain to someone why it’s never okay to kill innocent women, in return I got explanations telling me that she was wrong for not seeing the red flags… red flags? Is this how we justify murder? If we all go around holding victims accountable for their abuse, trauma or death why would there be a need to prosecute suspects? Victim- blaming encourages prospective suspects to commit crimes since they’ll believe it’s never their fault but that of the victim for not being aware or “seeing the red flags” sounds dumb right?

We often wonder why people are afraid to speak out when harm was done to them, it really isn’t the fear of talking, it’s the fear of being held responsible and blamed for their vulnerability. Though I respect the right for people to have an opinion, there are some opinions that should be kept within the confines of their mind. Concerning the same story, there was also another instance of victim- blaming, one which involves the 15 -year -old sister of Shonette Dover. This young girl allegedly witnessed her sister’s lifeless body after she was shot by her boyfriend. This sister was the only witness there that we know of. I could only imagine the fear that crept up on her, seeing that her sister was shot dead for an unknown reason and wondering if she’ll be next. There’s a saying, “when your hand is in tiger’s mouth, pat it”. Let’s be a little realistic now, imagine you being a young vulnerable 15 year old standing in the presence of a man holding a well-oiled loaded gun, will you scream and alert the neighbours which will eventually lead to your death or would you comply to save your life so that you would be able to live to tell the world your sister’s story. We all create unrealistic scenarios in our head to convince the world if you were that girl you would’ve been the hero in the story, but that’s not always the case. Trauma is real and how people cope with their trauma varies. There are people who have been keeping secrets or are hiding their trauma and abuse for years now and for those who spoke out about theirs, have at least once heard the question “why didn’t you speak out sooner” and they felt threatened and disrespected, now on a day like today these same people are the ones throwing stones talking about “if it was me I would’ve and could’ve” everyone is not you. That young woman is 15 years old, with a premature mental state. Society is quick to be remorseful when young people lose their life to suicide but are unaware that they are ones who add fuel to such actions with their judgemental ways. Almost everyone is on the bandwagon verbally abusing the young woman because it took her 27/28 days to speak out, why couldn’t you be a bit more grateful? Had she not been there, some would’ve assumed Shonette was abducted, another set would’ve assumed she was by a “sweet man” and the other set would’ve believed her boyfriend absolutely had something to do with her disappearance. Be grateful for that 15 year old sister for speaking her truth. She spoke out when she felt more at ease, the alleged suspect is nowhere to be seen, so she no longer had to fear for her life. Sadly Shonette is gone but her sister lives on to tell her story, she did not go to the grave with it. Now, use the same energy and post the image of the alleged murderer just like you did when Shonette was missing, share and alert your family and friends to be on the lookout, and use your same prayer tongue to pray for that 15 year old girl who now lives with the trauma of losing her sister. I’ll finish this column by saying, it was not our story to tell nor our burden to hold, so stop trying to be a psychologist and a hypothesis expert and use your energy to demand justice for our dear Shonette.

Mon May 3 , 2021
Support Village Voice News With a Donation of Your Choice. …ribs extracted for DNA analysis  Shonette Dover died from a single gunshot wound to he head, an autopsy revealed. In a press release police said that at about 11:00 hours on Monday a Post Mortem was conducted on the body of Dover at Memorial Gardens Mortuary, Georgetown by Dr Nehaul […]