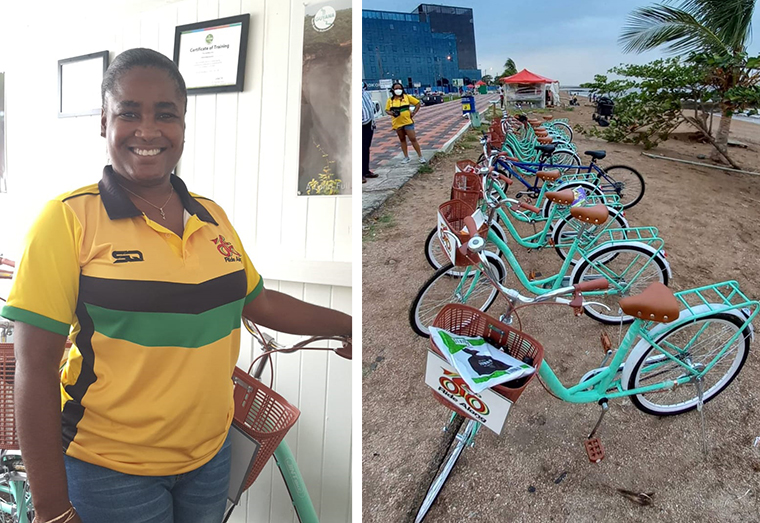 Thirty-six-year-old Cherryann Greene who was one of the recipients of the Small Business Bureau’s Green Tech Fund last year, has launched her dream business ‘Ride Along GY’ – a bicycle rental and tour services for tourists and locals.

In an interview with Village Voice News, Greene said this initiative is one that has been brewing for four years now, but she was discouraged from doing it, and she hadn’t the resources to make it a reality. Having travelled to various countries including Suriname and the US, who have bicycle tours, the young woman said that she always felt that it would do well in Guyana.

“There are a lot of tour companies out there, but none facilitates this service, we do not have bicycles for our overseas guests. And this is as green as it gets, and tourists enjoy riding tours because then you really get to take in the beauty of a country. So with Ride Along GY, you can either do a riding tour with us, or you can rent it for yourself,”she said.

“In order to rent, you have to produce a picture ID and $10,000 refundable deposit if the bikes come back undamaged. These are not regular bicycles, they are very expensive. They Retro Beach Cruisers, and we also have the Tandem bikes where two persons can ride at the same time,” she shared.

Persons can also choose from their list of 12 guided tours, including Sunset tours, Sunrise tours, Adventure and Nature tours, Sightseeing/history tours, Fitness tours and more, all of which can be reviewed on their website (www.ridealonggy.com) or social media platforms (Ride Along GY on Facebook and Instagram) or persons can visit the office on Durban street between Creen and Camp Streets.

Thus far, the young woman said she received support from GTT, who is providing the internet for the trackers on the bicycles, and SQ apparels a clothing company stationed in Miami, who is the official apparel sponsor for Ride Along GY.

Greene said with her business she wants to create employment, make it affordable to tour Guyana and to help and support other small businesses.

After taking a few blows in her professional life, she said that in January of last year, she made a decision to take three months at home, to work on herself, delving into some audio books and regrouping herself to go out back and seek employment. Sadly, when her three months of self-improvement had expired, Coronavirus hit Guyana.

She sent out several job applications and no one responded, given the economic blow the country was facing at the time.

This caused Greene to use the time to develop her business idea and see how best she could have made it a reality.

“I was sitting, wondering how I was going to get the money for my business, and I was talking to a friend one morning and he sent me a flyer that the Small Business Bureau had, and it was for a million dollars to start up a business. So I had one week to do a 12-page business plan, and I didn’t know much about that. But I had some friends come over and they all helped me and we submitted it on time, which was July 31, 2020,” she shared.

Four months after that (in November), Greene was still out of a job, which she said drove her into a state of frustration.

“I booked a ticket to travel to the US to relax from my frustration of being home for almost a year without anything to do. However, I went to test for COVID to be cleared for the flight, and I was tested positive and was barred from leaving the country… I believe last year was the most faith I have ever had in my entire life. Every time something didn’t work out, I wasn’t depressed, I didn’t get upset, it was just with the COVID and being home for a year got me a bit frustrated. But everything worked in its favour,” the young woman said.

After contracting COVID and not being able to travel, Greene received an email, followed up with a call, that she had received the one million dollars Green Tech Fund for her bicycle business.

Mon May 3 , 2021
Support Village Voice News With a Donation of Your Choice. By Shannae Trotz Blaming victims for a crime someone else committed towards them, has to be one of the most insensitive responses to a serious situation. I could never understand why people find it fit to hold victims accountable for their own abuse or death. This has been an issue […]