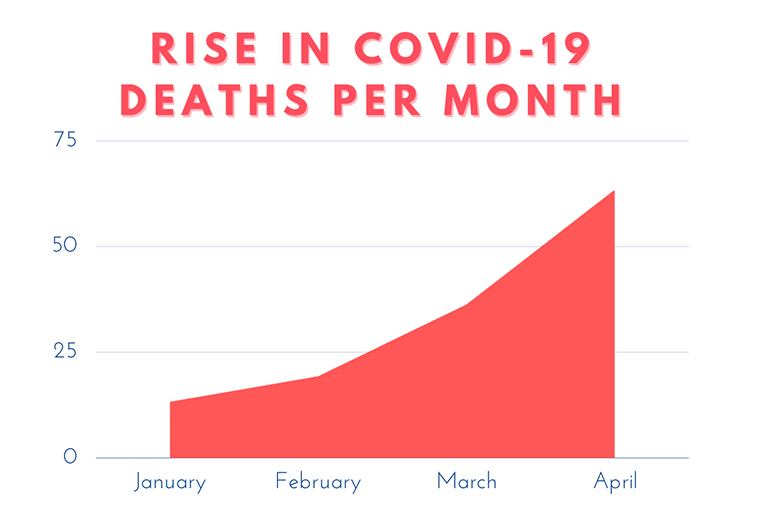 While March recorded a total of 36 deaths, in the first seven days of April there was already indication that the month was up for a concerning turn as 19 deaths were recorded. As of Friday, April 30, 2021, there were 63 deaths for the month.  At a press conference at State House on Wednesday, President Irfaan Ali said that his Government is concerned about the number of persons and businesses found breaching the COVID-19 guidelines which largely contributes to the spread of the virus.

However, he said that it is a struggle for his government to slap penalties on persons breaching the guidelines when putting them in jail could further influence the spread of the virus. As such, he has called on Prime Minister, Mark Phillips to discuss with the National COVID-19 Task Force, shifting the focus from individual breachers to businesses and business owners.

“We had hoped that common sense would have prevailed in following the established guidelines and, unfortunately, it hasn’t. The enforcement, therefore, of these guidelines will be further strengthened and enhanced,” he vowed. As has been the norm, Region Four recorded the most COVID-19 deaths at 24. This was followed by 13 deaths in Region Three; 12 deaths in Region Six; 6 deaths in Region Ten; 3 deaths in Regions 5 and 7; 1 death in Regions 2 and 9 and no deaths in Region 1 and 8. The Village Voice News put together the aforementioned data from all press releases sent out by the Ministry of Health regarding deaths.

Fire set to home of grandmother of Linden wanted man

Mon May 3 , 2021
Support Village Voice News With a Donation of Your Choice. The home of Mary Alleyne, grandmother of Shaquawn Alleyne, the man who allegedly killed his girlfriend and buried her in a shallow grave was set on fire Monday morning. Police in a statement said the matter is now engaging the attention of law enforcement officials, since it was allegedly set […]