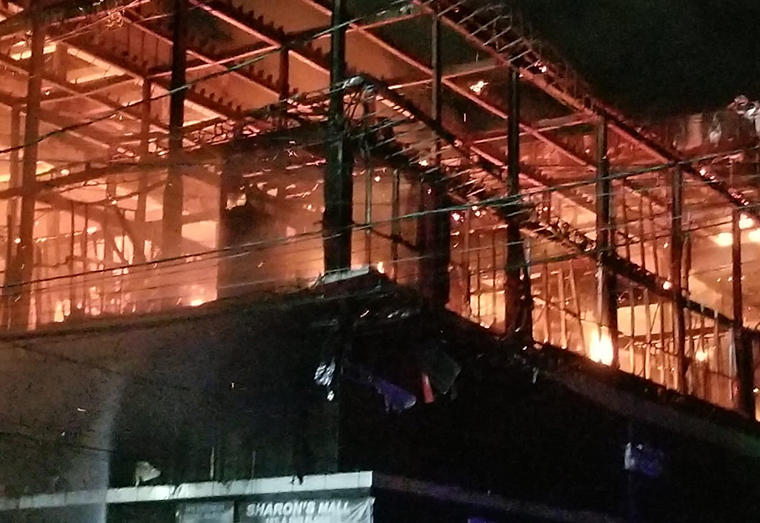 In light of Wednesday night’s fire that devastated the Sharon’s Mall the Ministry of Home Affairs is urging that buildings over two- stories high must be equipped with riser mains with hoses and fire sprinkler systems.

Scores of businesses suffered heavy losses due to the fire that flattened the three-storey mall. Though, the fire started around 17:00hr with just smoke could be seen in the building, firemen struggled to put out the smoke resulting in a full blown fire that engulfed the building. ” This is really sad, for two hours they couldnt put out the smoke and now this fire has taken over the building,” one of the tenants at the mall remarked during an interview with reporters.

The Home Affairs Ministry said building inspections for electrical and fire safety compliance are mandatory for such buildings and must be diligently pursued.

Meanwhile, in expressing regrets at the destruction of the building the ministry said too that a detailed fire report will ultimately determine the true cause of the fire and loss of the building.

“The Ministry would like to, again, remind the General Public by repeating the need for the installation of smoke detectors, fire alarms, extinguishers and other fire appliances,” the ministry statement added.

Meanwhile, the Mayor and Councillors of the City of Georgetown has advised the general public that its offices within the City Hall compound will be closed today, April 29, 2021. This is due to the smoke emanating from the ruins of the Sharon’s Mall building as a result of fire.

All of the offices will be opened on Friday April 30, 2021 as per the normal working hours. The Council regrets the inconvenience caused and thanks you for your understanding.

Thu Apr 29 , 2021
Support Village Voice News With a Donation of Your Choice. The Bar Association of Guyana has pledged its support to its colleagues who suffered losses and disruptions to their legal practices as a result of the fire at Sharon’s Building on Wednesday. “This indeed sad and tragic event which has not only impacted our colleagues but other business is indeed […]