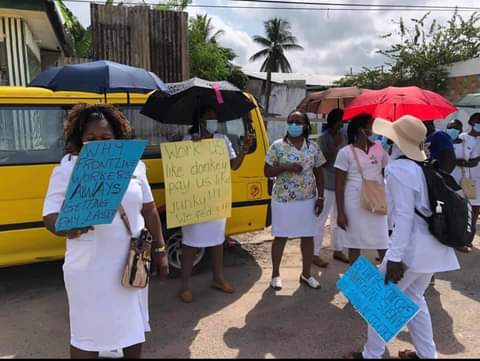 Amid complaints of lack of protective gear and other issues President Irfaan Ali on Wednesday said the conditions at the Linden Hospital Complex have improved over the past nine months.

This is despite testimonies of nurses, who have been on protest for well over 50 days for the removal of the Chief Executive Officer (CEO), Rudolph Small.

In response to a series of questions posed by Village Voice News during a press conference at State House on Wednesday (April 28), President Ali said working conditions at the Linden Hospital Complex have improved since the People’s Progressive Party/Civic (PPP/C) took Office last August. However, he said: “…Nothing has changed nine months ago to now, in terms of the work condition; for a matter of fact, it got better, because they have access to protective gear and everything now. The only change that took place is a change for the better,” the Head of State said.

But during a visit to Linden by Village Voice News just last week, nurses complained bitterly about the lack of medical supplies. Registered Nurse (RN) Olivia Trotman said last week that nurses at the Linden Hospital Complex are made to work with little or nothing as the health facility lacks basic supplies.

“There are many patients in the community that can testify about the amount of drugs they have to buy when they come at the hospital,” Nurse Trotman said while noting that despite the shortages, nurses, would often put forward their best, and stretch the little there is.

Since the beginning of March approximately 100 nurses at the Linden Hospital Complex have been protesting for the removal of the Hospital’s CEO over disparaging remarks he made in February to suggest that they often abandon their duties at nights to engage in extra-marital affairs. But that aside, the nurses have said that since taking up Office in late 2020, Small has shown scant regard for the workers of the Linden Hospital Complex, and under no circumstance they are prepared to work with him.
In response to the ongoing protest, President Ali said the Ministries of Health and Labour are actively engaged on the matter.
“Both the Ministry of Labour and the Ministry of Health are actively engaged on this matter, and there is a certain procedure that has to be followed at the Ministry of Labour,” the Head of State said.

Representative of the Guyana Public Service Union (GPSU), Maurice Butters, when contacted on Wednesday, said the Ministry of Labour, after meeting with representatives of the Health Ministry and the Union in March, referred the matter back to the Health Ministry.
According to the GPSU Representative, the union immediately dispatched a letter to the Health Ministry but a response has not been forthcoming.
Since then, the Health Ministry has taken a decision to cut the salaries of the nurses on protest.
In a letter dated March 4, 2021, a nurse at the Linden Hospital Complex was informed that deductions would be made from her salary over a period two months for reportedly being absent from work without leave or adequate excuse for approximately 25 days. However, the dates listed in the letter seen by Village Voice News spanned from October, 2019 to December, 2020.
According to the stamped Ministry of Health letter, the nurse was receiving a second warning in accordance with Section G of the Public Service Rules, and a third breach could result in dismissal.
Another letter addressed to another Registered Nurse, dated April 9, 2021 also included threats of dismissal. That nurse was accused of being absent from work for a period of 23 days from March 3-25, 2021 without leave or adequate excuse.
“By a copy of this letter the Principal Assistant Secretary (F) is hereby requested to make the necessary deductions at the earliest convenience,” a section of the letter dated April 9, 2021 stated.

Butters told Village Voice News that the deductions are illegal.
“The Public Service rules and the Labour Law state if an incident should occur and six months pass and nothing is done about it, you lose the right to bring it back on the floor, and those letters which were sent about people being absent and people not being at work, those are since 2017, 2018, so six months [have] elapsed and that is why we are holding strong that the deductions for those days are illegal,” Butters told this newspaper.

The GPSU representative is also contending that the deductions made for the month of March are also illegal, explaining that the nurses were never on strike, and as such their salaries cannot be cut.
“When you are on protest it is different from when you are on strike, when you are protesting, you sign on your time and then you come out to protest, if you are on strike then it is a different thing,” he posited.
Butters said contrary to the Labour Laws, some nurses in March and April went home with as little as $3000.
“The other thing is, some people received as little as $3000 for their month salary. The labour law also clearly states that not more than a third should be deducted from any employee’s salary, and before such deduction is done, there must be a conversation, between the Management and the individual,” he contended.
GPSU has vowed to challenge the Health Ministry’s decision to slash the salaries of the protesting nurses.

Wed Apr 28 , 2021
Support Village Voice News With a Donation of Your Choice. Guyana Telephone and Telegraph Company (GTT) and Guyana Economic Development Trust (GEDT) – a U.S. and Guyana-based programme that supports science and technology startups – on Wednesday announced the 2021 winners of the Guyana Innovation Prize. The winners are: Greenway:  A Household Indoor Farming System; Medicine from Trees: Rainforest Skin […]