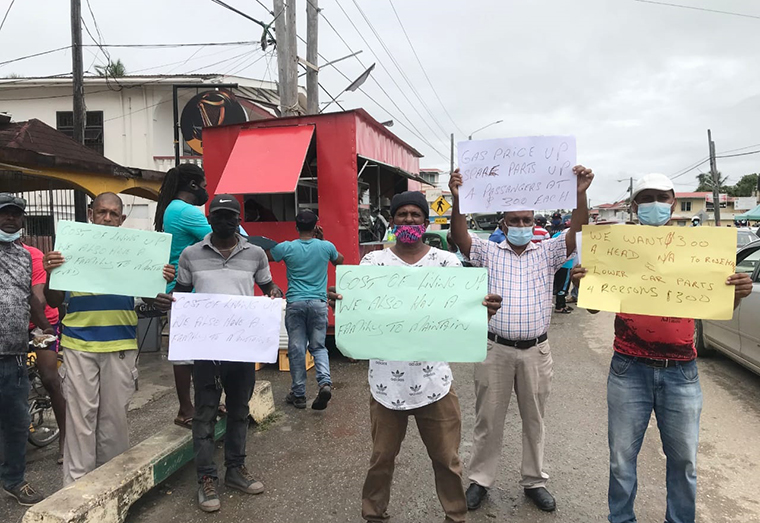 For the past months the price of fuel in Guyana has been on the rise and it has taken a tremendous toll on hire car drivers. On Tuesday morning, scores of hire car drivers in Region Six, Corentyne-Berbice, staged a protest at the Rose Hall Town car park, demanding an increase in taxi fares as they continue to face challenges with the steady increase in fuel prices.

On Monday the men had held a peaceful protest along the #19 Public Road to vent their concerns regarding the same issues, with hopes of having the relevant authorities look into their plight.

The price for fuel was once less than $160 per litre, however it began to rise incrementally over the past months. To date, the price for fuel on the Corentyne stands at $200 per litre; a massive blow to hire car drivers. As a result, hire car drivers are calling for an immediate increase from $100 to $140 for short drops. They also indicated that taxi fares from New Amsterdam to Rose Hall Town should increase from $200 per person to $300, given the fact that they are operating at a loss with the current fares as the money is not sufficient to provide a livelihood for their families.

It has been more than seven years since hire car drivers are operating with the current fare structure  despite the continued increase of fuel prices throughout the years. According to the men, they were able to provide enough for their families then, but this protest sparked following the increase in fuel prices along with the rise in the cost of living, not just in Berbice but the entire country.
Another contributing factor to the challenges faced by these hire car drivers is the COVID-19 guideline that requires them to carry only 3 persons per trip. Prior, four persons were allowed to travel in a car but according to the men, traveling with 3 passengers at a cost of $200 per person is something that needs to be reconsidered due to the fact that the price of every commodity in Guyana has skyrocketed.

Avinash, a young hire car driver noted that it is extremely difficult for taxi drivers during this time. He said not only the cost of living is a blow to their face but the cost for spare parts have also increased causing them to go beyond their pockets just to survive.
“Today is the second day we out here protesting for an increase in car fare because the gas price gone up and the cost of living is really high right now and it is difficult for us to fetch three persons at $200, we want 4 persons at $300 because everything gone up. You go in the store today and everything raise, even up to spare parts raise and when you talk to the shop people them they saying tax heavy and they can’t less the price. Where we car man gon find all this money to maintain our vehicle, maintain we family and then fetch 3 people for $200 a person, it can’t work so we need this increase.”

Another hire car driver who has been in the business for the past 7-8 years said this has been a major issue from years back. He noted that fuel prices and taxi fares have always been a challenge to them. He further added that many days they work from 7 in the morning to late in the evening and when they are ready to sort out their expenses and refill their fuel tanks at the end of the day, they have nothing much left to take home. He said, since the increased fuel price, they have to refill at least 2 or even 3 times a day.
“Not all of us can put $5,000 gas one time and done, sometimes you put in $2000 or $2,500 and by the time you make two turn it done, we does work whole day and we gatto get gas to run the car and the price for gas now gone too high. Is not only gas price too, but the cost of living is too high in this country. We can’t sustain this hire car business at $200 a person and then the car parts killing we out, it too expensive. We can’t maintain we car, maintain we self and family with $200 a person and then carry only 3 passengers. The $200 is nothing because when you working for $200 most of the money does gone to expense for the car so there is no way we can be able to survive with what going on now. The gas price raise about 11 times over the past 2 months. Tell me how we gon survive? For the past 15 years hire car driver working for $200 and if you check how much time gas increase since then. Not only gas too, every other item that come in this country and even the ones that does produce here increase. Why we hire car drivers can’t get an increase? It is very hard on us, Vishal said.”

Harripaul another frustrated hire car driver said, not just them but their families are suffering since many of them are the sole breadwinner of the home. He noted that the protest action taken by hire car drivers are not only for them but for every other citizen in Guyana that are facing challenges with the increased cost of living.

“Cost of living right now gone real sky high. If you go in the supermarket right now, everything gone up. And this is the reason why we striking because everything keep climbing in this country. Guyanese people suffering bad in this country, with our own resources we suffering tremendously and we gatto pay nuff money for what we produce here. All them government doing in this country is giving people a set of promises. They say they spending millions of dollars in this country and we ain’t see no development; it going in their pocket.”

Harripaul stated that something needs to be done immediately because sustaining a family, paying bills, sending children to school and maintaining a vehicle is tough for one man to do while operating a business at such a low cost.

“The streets them you gatto go through to drop off people for $100 is nothing because sometime you go in there and you get a puncture tire, when you come out back and go to the tire shop is $400 to plug a tire. We cannot make it right now, we need this increase because how the money come in we hand is just so it going out back.”

Two years on: no increases for public servants

Tue Apr 27 , 2021
Support Village Voice News With a Donation of Your Choice. …GPSU accuses gov’t of ignoring their plight The Guyana Public Service Union (GPSU) said despite the steep increase in cost of living linked to the economic fallout amid the COVID-19 pandemic, the salaries of public servants have remained stagnant for more than two years. “Employees of the Public Service have […]