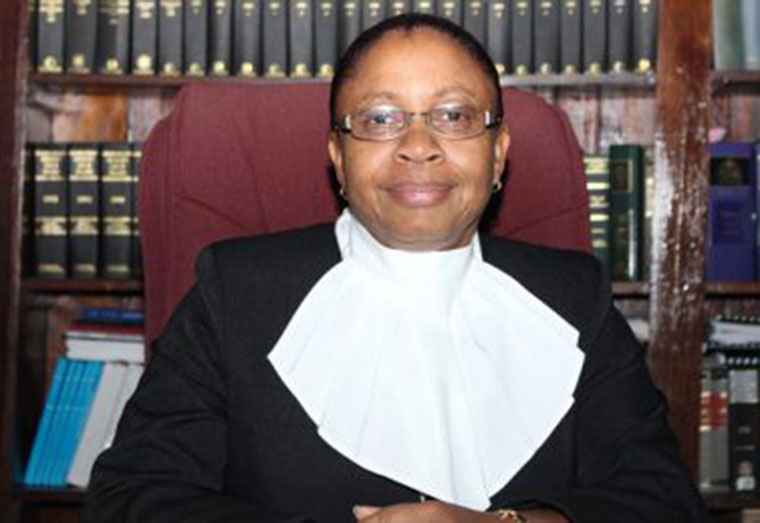 By Svetlana Marshall
Chief Justice (ag) Roxane George Monday, dismissed the APNU/AFC Election Petition and ruled that there is nothing unconstitutional about Section 22 of the Election Laws (Amendment) Act and Order 60 (Recount Order), which were relied upon by the Guyana Elections Commission (GECOM) to facilitate a national recount of the votes cast at the March, 2020 General and Regional Elections.

The court decision has dealt another blow to the coalition’s efforts to overturn the declared results of the March 2, 2020 polls that was plagued with discrepancies based on the evidence unearthed during the national recount. Notwithstanding, the coalition has signaled their intention to appeal the ruling even as it criticises the ruling.

“My analysis of the authorities cited has led me to the ineluctable conclusion that Section 22 is not ultra vires the Constitution and I so hold. There has been no violation of the doctrine of the separation of powers. Section 22 is meant as an aid to the process, so as to permit a determination of a result,” Chief Justice (ag) George said has she handed down the ruling on Monday.

It was based on data coming out of the national recount that the People’s Progressive Party/Civic (PPP/C) was declared winner of the 2020 Elections, and Irfaan Ali the Executive President of Guyana.

For the Petitioners – Claudette Thorne and Heston Bostwick – the Constitution did not confer power on the Elections Commission to conduct a National Recount and or set aside the declarations made by the Returning Officers, but the Chief Justice (ag) said GECOM did not usurp the jurisdiction of the High Court under Article 163 when it relied on Section 22 of the Election Laws (Amendment) Act to bring the Recount Order into effect.

The Chief Justice (ag) said while Article 162 (1) B gives GECOM wide ranging powers to facilitate a fair and credible election, Section 22 of the Election Laws (Amendment) Act allows for the removal of any difficulty that may arise during the course of an election. She said that it is an undisputed fact that there were difficulties during the 2020 Elections, and it was on that basis that GECOM relied on Section 22 to facilitate the National Recount with the primary aim of resolving the difficulties.

“I have concluded that Section 22 is an implementing provision to operationalise Article 162, so that GECOM could exercise its functions in the management of an election process. This is to say, Section 22 buttresses Article 162 (1) (b) and provides a framework for the implementation of this sub-article. It therefore falls within the four corners of this provision of the Constitution,” Chief Justice (ag) George ruled.

“It simply set out a procedure for the recount of ballots, a power that GECOM possesses under the provisions of the RPA,” the acting Chief Justice emphasised, while noting that if an officer of GECOM goes rogue during the conduct of an election and fails to adhere to the provisions of the Representation of the Peoples Act, it cannot be that GECOM must accept the results the officer provides and await the outcome of an election petition.

“Given the difficulties it does appear that it would not have been prudent for GECOM to declare the results in the peculiar circumstances,” the Chief Justice (ag) said, noting that GECOM could not have been expected to act on advice known to be unlawful or lacking in legitimacy.

“Thus I have concluded that Order 60 is not ultra vires the Constitution or Section 22. A combination of Article 162 (1) (b) and Section 22 confer the power on GECOM to issue this order, if GECOM considered it necessary or expedient to ensure impartiality, fairness and compliance on the part of persons exercising powers and performing duties on its behalf as regards elections process and the declaration of the election,” the Chief Justice (ag) ruled.

Further, she ruled that the petitioners, through their attorneys, failed to provide evidence that GECOM did not abide by Order 60 when it declared the results of the elections on August 2, 2020.

Mon Apr 26 , 2021
Support Village Voice News With a Donation of Your Choice. …while “unproductive sugar industry” to receive $200M …says lack of funding aiding spread of COVID-19, pile-up of garbage Georgetown Mayor, Ubraj Narine has requested “immediate financial assistance” from Central Government due to the Municipality’s non-receipt of budgetary subventions pegged at 10 million dollars for 2020 and 30 million dollars for […]