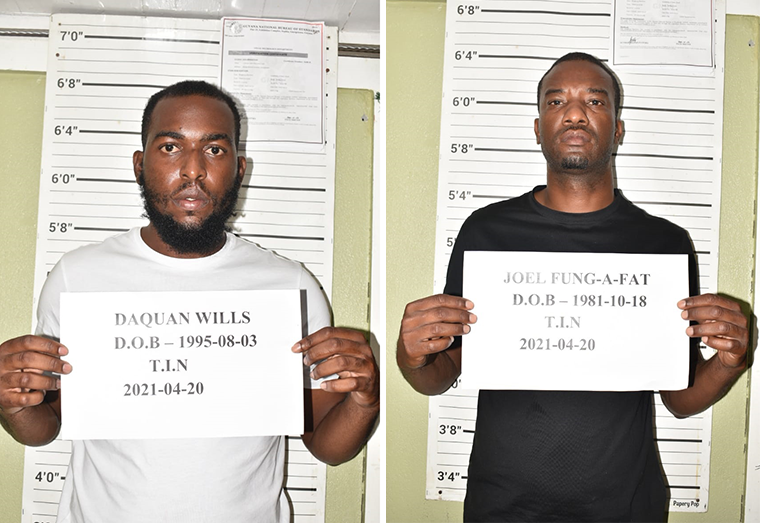 Two suspected drug traffickers were arrested after being cornered during a high speed case on Tuesday, April 20. The arrest led to the discovery of more than 2kg of cocaine and more than 17kg of marijuana.

The suspected traffickers have been identified as 25-year-old Daquan Wills of 141 Meadow Brook Drive and Joel Fung-A-Fat, a 39-year-old Foreshaw Street, Georgetown resident, who also has a US address.

“When Ranks attempted to intercept the said vehicle, it sped away and CANU gave chase and intercepted same at Lance Gibbs Street and Vlissengen Road Georgetown. During the chase a brick of suspected cocaine was thrown from the vehicle and same was retrieved by CANU ranks,” the unit explained. The suspected cocaine brick thrown from car, upon being retrieved by CANU, totaled 1.054 kg.

Notably, Wills was the driver of the car while Fung-A-Fat was a passenger.

As a result of arrest, the two suspects led the CANU ranks to a search in Stone Avenue Campbellville. In the yard of an abandoned range house amongst garbage, another brick of suspected cocaine and a bag containing bulk parcels of suspected cannabis were found.

Why MoE has to manage the academic aspect of the scholarship initiative?

Wed Apr 21 , 2021
Support Village Voice News With a Donation of Your Choice. Dear Editor, The Government has announced and even advertised its 20,000-scholarship initiative. They have indicated that there are two aspects to the administration of the initiative: the administration of the scholarships, to be done by the Public Service Ministry; and the management of the academic and technical aspects to be […]