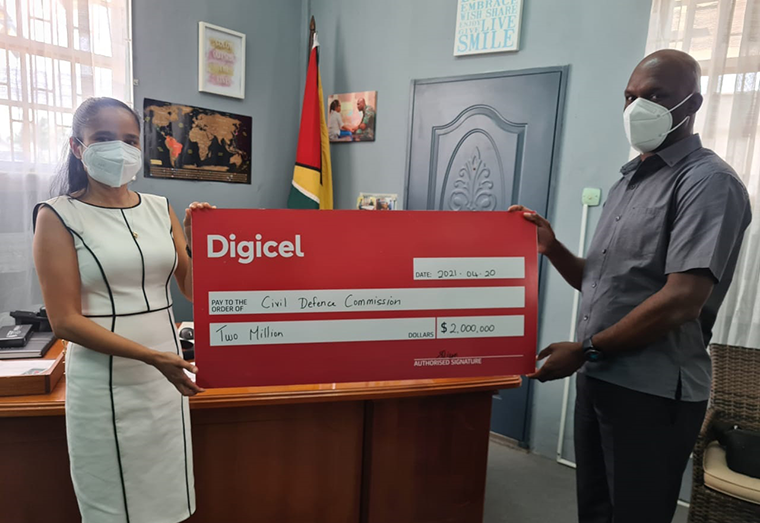 Digicel Guyana on Tuesday donated GYD $2,000,000 to the Civil Defence Commission (CDC) as its contribution towards relief support for the island of St. Vincent & the Grenadines, which was devastated by the Le Soufriere volcanic activity.

Thousands of people have been evacuated from the red zone and housed in shelters, as a result of ash fall from the explosive eruptions of La Soufriere.  These eruptions have affected the entire island and the situation continues to be difficult for residents.

Digicel in a press release said it is committed to working with the Government of Guyana on national and regional emergencies and commends the CDC for their management of the relief efforts. “We are confident that our donation will be put to good use in meeting some of the immediate needs of the people of St Vincent & the Grenadines,” Simone Pierre, Head of Commercial said at the handing over ceremony. “Digicel is honoured to be part of this collaborative effort initiated by the CDC in providing relief to the people of St Vincent and the Grenadines. We would like the Vincentians to know that our hearts and prayers are with them during these difficult times,”she added.

Digicel Group has also shown its commitment to helping the St Vincentians rebuild by donating US$500,000 worth of much-needed items to the government of St Vincent & the Grenadines last week. Commenting on the assistance, Digicel Group Chairman, Denis O’Brien, said; “With our priorities being helping to keep people safe and keeping them connected, it’s at times like these that our natural instinct is to want to do everything we can to help. As a company, as a team and as the Digicel family, we are here for the people of St. Vincent & the Grenadines and ready to help in a meaningful way.”

1000 teachers to be trained for online platform

Wed Apr 21 , 2021
Support Village Voice News With a Donation of Your Choice. Minister of Education, Priya Manickchand has welcomed the launch of the online learning platform for the delivery of education, which would see some 1,000 teachers being trained initially. Speaking during Tuesday’s virtual launch, Minister Manickchand said the COVID-19 pandemic showed education systems around the world how unprepared they were to […]