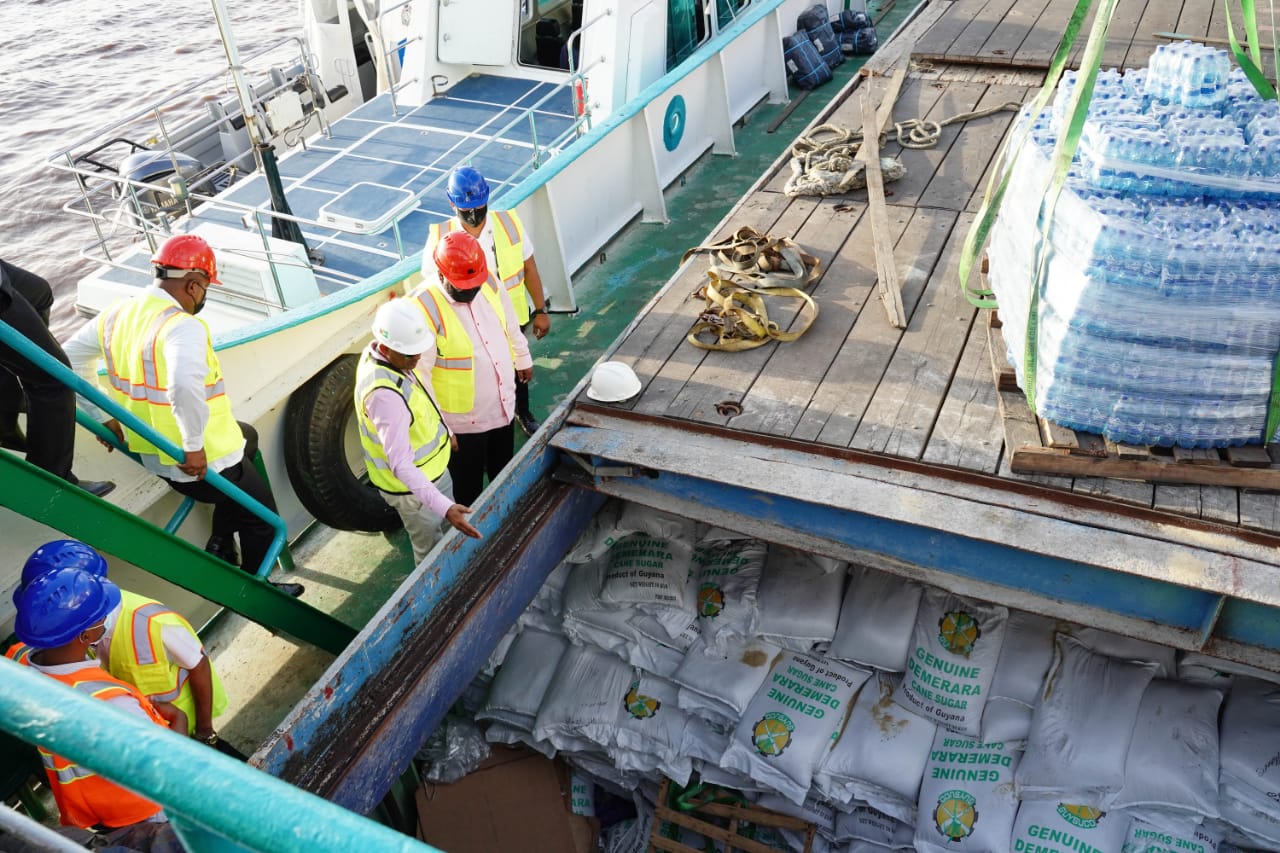 President Irfaan Ali  has committed to not only supporting the people of the volcano-affected nations of St Vincent and the Grenadines and Barbados in the short term, but throughout the process of rebuilding.

President Ali made the remarks on Monday  after he visited the Muneshwers Wharf where MV Lady Fazeela was being loaded with the third shipment of emergency supplies for the two CARICOM islands.

The shipment is scheduled to leave Guyana’s shores today, the Department of Public Information reported.
St Vincent where the Soufriere volcano is located has been the hardest hit, while Barbados has been affected by ash from the volcano and is facing a water shortage.

“I am very pleased to be here this afternoon to witness first hand, the efforts that all of you would have been putting in, all of Guyana would have been putting in to support our sister State and Member of CARICOM—St Vincent, and particularly in this shipment supporting also Barbados,” President Ali said.
He noted that the relief efforts by the Government, the Private Sector and ordinary citizens show what can be achieved when there is unity.

The President, who visited the wharf with Prime Minister, Brigadier (Ret’d) Mark Phillips, said that Guyana will continue to lend assistance to the affected nations.
“Guyana understands our responsibility to CARICOM, we understand our role in CARICOM and I want to assure PM [Mia] Mottley and PM [Ralph] Gonsalves that not only are we with them in this immediate term, but we are with them throughout the process of rebuilding not only the physical infrastructure but rebuilding the lives that would have been affected.”
President Ali extended gratitude to the business community, which he said has shown on many occasions, that it can rise to different challenges and that it is committed to not only the development of Guyana but the region as a whole.
“I think in CARICOM itself there should be great recognition for the tremendous work of Guyana’s Private Sector in mobilising resources.”

He noted that the Private Sector’s consistent actions and positive response show its commitment to fulfilling its corporate social responsibility, which he said Guyana should be very proud of.
President Ali also thanked Prime Minister Phillips, members of the Government and the Civil Defence Commission for their “tremendous leaderships and work day-after-day”.

The President also extended gratitude to the owners and operators of the two ships—Miss Meena and Lady Fazeela—for allowing the use of the vessels in getting the critical food, water supplies and protective equipment to the islands.
“So today, at this very simple setting, I just want to thank all of you, I want to thank the men and the women in our Army, in our Coast Guard. We have officers who went on the last vessel and will be going on this vessel also. We have officers on standby who are waiting to assist should the need arrive, should the request be made. And I must say this to you, to all those who would have contributed; when we called upon them, there were no questions as to what payment is there, what reward is there. In a selfless manner everyone came forward; from the owners of the vessels, the private sector officials in government, army officials, Mr Musneshwer and his staff who also helped tremendously.”
President Ali added that the collected efforts and unity that have been shown so far should be synonymous with what it means to be Guyanese.

“This is how we have to operate, this is what Guyana must be known for—a collection of people ready to serve at any time, ready to answer the call of humanity at any time. These are the traits of Guyanese—we are a loving people, we are a caring people, we are a sharing people and we are a committed people, and for this I am most proud.”
The Soufrière volcano first erupted on Friday, April 9, with several other eruptions since.  Residents are significantly affected and many have been displaced.

Tue Apr 20 , 2021
Support Village Voice News With a Donation of Your Choice. Cost of living in Guyana is rising which is making it even more difficult for the ordinary man to get by. Essential commodities, such as milk and meat, have increased by more than 20 percent within the past months. Going to the market is proving a headache for shoppers, particularly […]