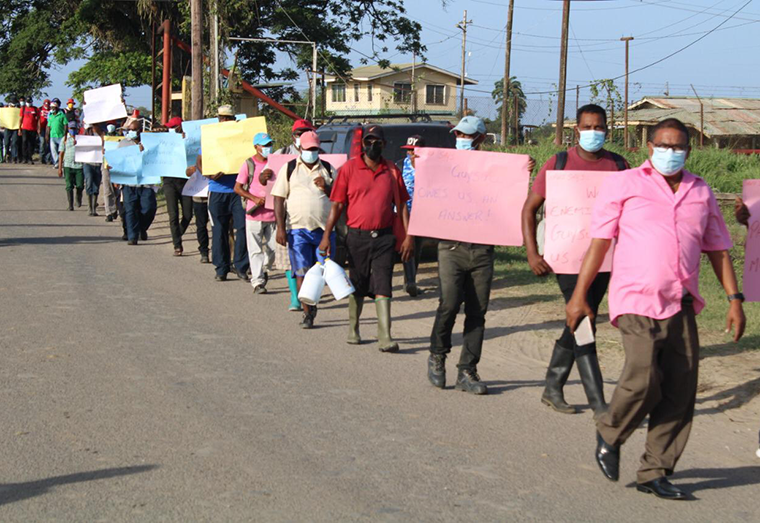 Scores of sugar workers attached to the Albion and Blairmont Estate in Regions’ Five and Six, on Monday took strike action and held protest across the two estates demanding an increase in wages and calling on GUYSUCO to engage them on the decision of wage negotiation.

Back in 2015, the workers were given a 5% wage increase but has since been placed ‘under the mat’once again. On March 09th, 2021, GUYSUCO and members of the Guyana Agriculture and General Workers Union (GAWU) had a meeting where they discussed several matters; wages increase being the major one. However, an executive member of the union, Michael Inderdat, said that GUYSUCO’s Chief Executive Officer, Sasenarine Singh was present at the meeting and had promised “something”. He further stated that Singh informed them that a decision had to be made by the Government since it is them who are responsible for allocating the money.

Even though the union wrote to GUYSUCO, after March 31st, 2021, seeking an answer as it relates to the workers’ wages increase, GUYSUCO seems to pay them no mind and is still yet to respond. The poor effort from the sugar corporation, built frustration and anger amongst the sugar workers that sparked a protest and strike. The workers are claiming that if they are not given an increase soon, they will continue to take strike actions.

Inderdat, said they are given false hope as they were promised an increase by the new government that took office last year.
“When we had the meeting last month and the CEO was there, he said that they will give us something but we don’t know what that something is. He said that they gatto go to the Government for the money. GUYSUCO write the government and up to this day GUYSUCO didn’t call we back and tell we anything. It is too long now and we are getting very agitated”
Another member of the union, Steven Inderdat said it has been very frustrating to work and not receive an increase for so many years, given the fact that the cost of living in Guyana has skyrocketed during the course of the past 5 years. He noted that throughout the years, in order for the sugar workers to be given an increase, they had to take strike actions and this has somewhat become a norm.

“Sugar workers are the hardest class of workers in this country and this is how we have to fight for an increase. If you look across the country, everything in the supermarket is right up to the max and we does only work for $2,000 a day. Tell me how we gon survive? We does work so hard, rain or sun, we does be out there for 7-8 hours and it is very unfair for us. We have needs and we have family to take care of and our pocket is not that deep, that is the reason why we are out here”

Inderdat is calling on the government to intervene and make a decision to ensure sugar workers are given a fair opportunity just like every other working class of people. Inderdat noted that the CEO of GUYSCUO is solely responsible for them and he is pleading with him to make a change and adhere to their plights to reduce the difficulties sugar workers endure to sustain themselves and family.
Meanwhile, Branham Somrah, a long serving sugar worker of GUYSUCO who previously worked at the Skeldon Sugar estate and was lucky to be employed at the Albion estate after its closure said that it is becoming tough for them to maintain their family and pay bills. He noted that he has children going to school and it’s very difficult to make ends meet with just $2,000 a day.

“The former government give us an increase but what this government do? They making promise to people at all round and they can’t fulfill their promise. It’s very hard to maintain a house and then crop will finish soon, we not gonna get any work so imagine what will happen to people like us. They make it worse for us sugar workers and then the business people in this country raising thing every day”

Somrah said he is hoping that something can be done since over the years this has been an issue that never really concerned GUYSUCO. He noted that money continues to be injected into GUYSUCO for major investments and development but none of those money are reaching the pockets of the sugar workers who are the pillar of the corporation.

“This government studying to build road from Ogle to Timehri, I don’t know since when road does give food. So much fatal accidents on the road every month and them a study to build road. They not studying about the people. They promised us and today they turn their back against us. We are meeting a tough time with the cost of living and this government have to raise we money.”
Only last week, sugar workers of the Uitvlugt Estate held a picketing exercise in regards to the same issue.

Tue Apr 20 , 2021
Support Village Voice News With a Donation of Your Choice. President Irfaan Ali  has committed to not only supporting the people of the volcano-affected nations of St Vincent and the Grenadines and Barbados in the short term, but throughout the process of rebuilding. President Ali made the remarks on Monday  after he visited the Muneshwers Wharf where MV Lady Fazeela was […]