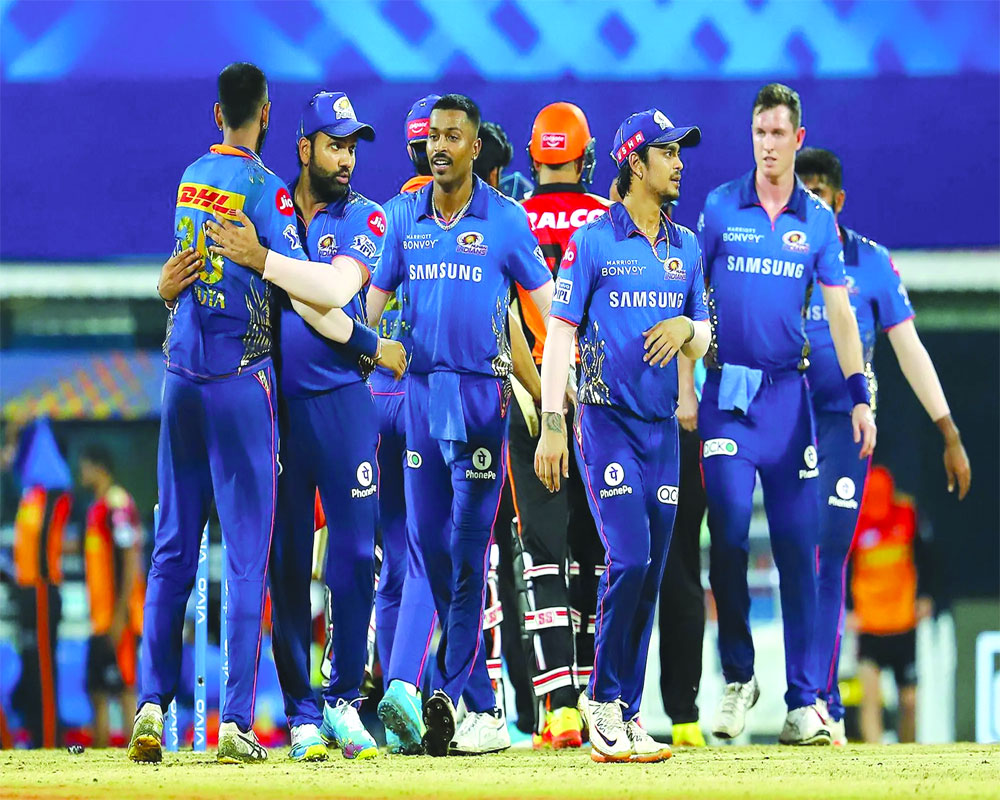 (CRICINFO) Taking inspiration from two successive successful defences of middling totals at Chepauk, Mumbai Indians became the first team in this IPL to choose to bat and defend successfully. Their 150 for 5 landed in the middle of the 152 and 149 defended in the two previous matches, but Jonny Bairstow, opening this time, threatened to run away with the game taking three of the powerplay overs for 52 runs. However, the crafty Mumbai Indians bowling rallied around Jasprit Bumrah, who went without a boundary in his four overs for the fourth time in the history of the IPL.

Rahul Chahar broke the back of the Sunrisers Hyderabad with three wickets in the middle overs, and then Trent Boult came back to wipe off any resistance, with a little help from Bumrah again. For the Sunrisers, it was another case of Warner-Bairstow or bust, and not for the first time since the start of the last IPL. Bairstow left the scene with 84 to get in 82 balls, which became 61 off 51 balls when Warner ran himself out, a fourth captain getting run out taking a quick single this IPL.

Vijay Shankar, who had taken two wickets but dropped Kieron Pollard in the 19th over before Pollard caused the damage, kept the Sunrisers alive with 28 off 25 but Bumrah and Boult were too good in the end on a slow pitch.

On this pitch, you do all your scoring in the powerplay, but also be mindful you don’t lose too many wickets trying to do so. With Quinton de Kock struggling for his touch, Rohit Sharma took on the onus of scoring, scoring 31 off 23 in the powerplay. At 53 for 0, however, no side could claim the honours.

As soon as the field spread, the game changed completely. Shankar used the slowness in the surface to have Rohit caught at deep midwicket, and did the catching himself for the dangerous-looking Suryakumar Yadav. The Sunrisers didn’t mind that Rashid Khan enjoys a great match-up against Pollard and Hardik Pandya. They used him from overs eight through 12 for just 17 runs. When Mujeeb Ur Rahman came on to replace Khan, he removed de Kock, caught at deep midwicket for a 39-ball 40. Mumbai 98 for 3 in 14 overs.

Mumbai win at the death, only just

It was now down to the best lower-middle order of the last IPL to drag Mumbai to a total they might feel comfortable with. However, Khaleel Ahmed, Khan and Mujeeb stifled them. Mujeeb got Ishan Kishan caught down the leg side by the wicketkeeper, and Ahmed got Hardik. Leading up to the last two balls of the innings, no sixes had come in the last 27 balls. Between them, three of the four new players, Shankar, Ahmed and Abhishek Sharma bowled eight overs for 48 runs and three wickets.

Pollard, dropped in the 19th over and so far shanking everything to midwicket because of the slowness of the surface, finally found a Bhuvneshwar Kumar delivery in his slot and hit it for a six. The last ball wasn’t in the slot but had enough pace on it for Pollard to send it over deep midwicket. On a rare off night, Kumar ended up with figures of 4-0-45-0. Their 43 in the last four overs were the joint-highest effort at Chepauk this IPL.

The other change in Sunrisers’ line-up was the dropping of Wriddhiman Saha and the promotion of Bairstow to the top of the order. It nearly proved right as he laid into the New Zealanders, Boult and Adam Milne. He hit three fours and four sixes in 15 balls in the first five overs. At 55 for 0 in five overs, the Sunrisers were possibly a good final powerplay over from practically sealing the chase.

Mumbai claw back
Which is probably why Rohit went to Bumrah to close the powerplay out. He nearly got Bairstow out with a slower ball, but a two-run over meant the Sunrisers still had work to do now with the field spread out. There was no reason, though, for Bairstow to change his tempo. Unfortunately, though, his back foot slipped onto the base of his wicket as he looked to ramp Krunal Pandya, making him the fifth Sunrisers victim out of 13 hit-wicket dismissals in the IPL.

Chahar, coming off a star hand in Mumbai’s win in the last match, then turned the screw in. Manish Pandey, for a change, eschewed his anchor game, but with no luck as he hit straight to long-off for a seven-ball two. Then Warner went off for the fateful single with the ball hit straight to point.

Rohit smartly snuck in two Pollard overs to exploit the slowness of the surface and provide insurance should either Boult or Milne not be able to bowl out. From the end of the fifth over to the end of the 14th, only one boundary came for the Sunrisers, that too off a top edge. The pressure was too much for an inexperienced middle order, and Virat Singh and Abhishek holed out in Chahar’s last over.

Shankar tries but in vain
With 47 required in five overs and the fifth bowler’s quota done, Rohit still went to Krunal to avoid bowling Milne at the end. Shankar hit two big sixes to keep the Sunrisers breathing, but Bumrah’s mix of slower balls and yorkers on the slow pitch raised the asking rate high enough for Boult to take advantage of the batters who had no option but to hit out at him.

Sun Apr 18 , 2021
Support Village Voice News With a Donation of Your Choice. (BBC SPORT) Chelsea ended Manchester City’s hopes of winning an historic quadruple as they edged a closely-fought FA Cup semi-final at Wembley. City and Chelsea had both secured their places in the last four of the Champions League this week – but Pep Guardiola’s side had their sights set on […]