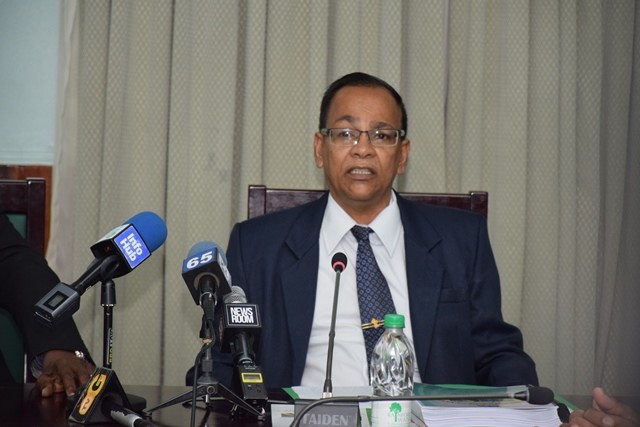 Auditor General (AG) Deodat Sharma said that the COVID-19 cash grant audit, intended to ensure that there is equitable distribution of the $25,000 grant, is far from over as crucial draft financial statements needed from the Ministry of Finance have not yet been provided.

In an interview with the Village Voice News, the AG said that efforts are being made by his office to complete the audit which was requested by President Irfaan Ali but delays are being experienced. “I wouldn’t say that it’s near to completion because I’ve not received their draft financial statements as yet. Until I get that then I can comment on it. Unfortunately, I think one of the persons who was responsible for preparing the statements, that’s the guy who died from the Ministry of Finance,” he explained. The individual in question is the late Pretipaul Jaigobin, a Financial Analyst of the Finance Ministry who was working on COVID-19 cash grant-related activities before he died in a vehicle accident on April 1.

Meanwhile, Officers from the Audit Office are in Regions 3, 4, 5 and 6 monitoring the distribution and verifying data on the ground. There are also visits to the other Regions in Guyana when the Office organises visitations. “We have been verifying as payments are being made, we’re test-checking in various places but, in total, until we get the statements, we’ll know…in terms of total because we really don’t do 100 percent checks, it’s normally just a sample,” Sharma said.

Distribution of the grant began on September 29, 2020 and President Ali announced that every household would benefit. The grant is meant to cushion the effects of the pandemic and stimulate the economy by increasing people’s spending power. However, a number of persons in Regions across Guyana have complained to the media that they have either not received their entitled $25,000 or the pink slip (forms), which are issued when there is a challenge.

Opposition Leader, Joseph Harmon had expressed in January: “Thousands of households are being denied [and] bypassed. Guyanese who are suffering and who are entitled have been complaining that they have not received the grant even though, in many instances, the distribution agents have visited their areas and some of them actually live next to these agents who are distributing the grants.”

In those early months of the distribution, President Ali said that while he had not received formal reports of persons not receiving the cash grant, he is aware of concerns raised on the subject which is why the Office of the Auditor-General has been asked to confirm that the $25,000 has been properly disbursed. Though the audit is not near completion, in keeping with the request, the AG said that his Office has also encouraged Guyanese who face the aforementioned challenges to contact the Office to place such on record. “There have been a lot of complaints, in and out, and I think mostly it’s because of the pink slips. I’m hoping that in this second payout those issues will be addressed,” he said. The Audit Office is currently not in receipt of information on how many pink slips have been issued.

In an interview with the Department of Public Information (DPI) on March 19, Minister of Local Government and Regional Development, Nigel Dharamlall said that the second phase of the Government’s COVID-19 cash grant initiative is to begin “soon”. The fact that the distribution has been divided into two phases will not affect the ongoing audit, it simply means that the second phase will have to be audited as well.  The last figure provided by Vice President, Bharrat Jagdeo is that over GYD$7.8 billion has been pumped into the country through the COVID-19 cash grant.

Asked whether the Ministry has indicated that is actively working to provide the outstanding financial document, Sharma said: “Yes [they indicated] they are working on the statements and I think, as I said, the same guy from Ministry of Finance who died lately, he was one of the key persons in terms of preparing the statements so I’ll have to check back and see now who has taken over that,” Sharma said. No timeframe for the provision of the statements has thus far been provided to his Office.

Mon Apr 12 , 2021
Support Village Voice News With a Donation of Your Choice. …immobilised PAC holds up reconstitution of Procurement Commission  …transparency advocates say delay can breathe corruption, siphoning off of billions     By Svetlana Marshall   Monday will mark 10 weeks since the work of the Public Accounts Committee (PAC) ground to a halt as government Members of Parliament seek to remove […]