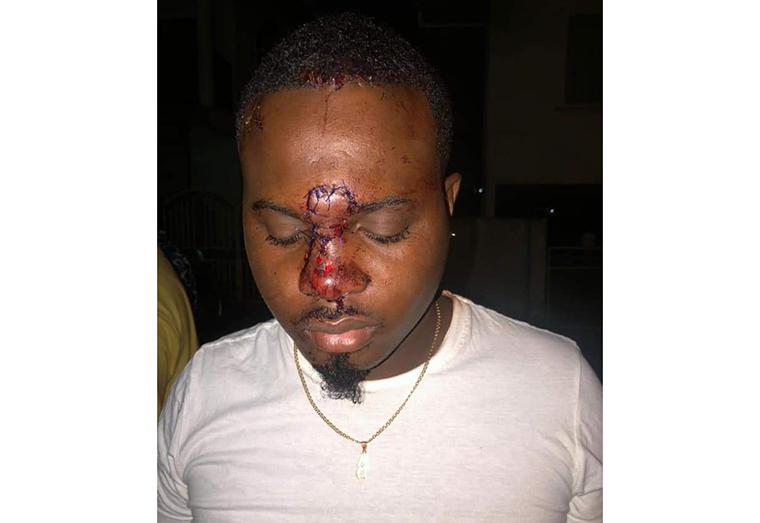 A Disc Jockey is nursing stab wounds  to his face following a brawl with one of his colleagues at the HJ Boom FM radio studio Saturday evening.

The incident occurred around 20: 45hrs at the radio station’s  Lance Gibbs St. Queenstown headquarters.
Injured is  28-year-old Radio DJ Yannick.
The suspect has been identified as DJ Raw Gold.

In a press release police said that on arrival at the radio station where he worked, the victim claims he made contact with the suspect and they got into an argument over work.

The suspect then armed himself with a Guinness bottle, broke same and dealt the victim four stabs about his face.

The suspect then made good his escape in an eastern direction. The victim was taken to Georgetown Public Hospital and was seen and examined by a doctor; treated and sent away. Efforts are being made to contact the suspect.
Statement from HJ 94.1

The Management of HJ 94.1 is aware of an incident that occurred at our radio studio between an independent dj and his selector during their programme at our studio.

The matter is currently under investigation by the Police and HJ 94.1 has made a decision to suspend the independent programme and the two individuals from our airwaves.

It is important to note that the two are independent deejays who like others purchase air time from the radio studio to air their weekend programmes.

Sun Apr 11 , 2021
Support Village Voice News With a Donation of Your Choice. Guyana on Sunday recorded three Covid-19 deaths and 105 new confirmed cases of the virus, the Ministry of Health has announced. Among the fatalities are: three women, one 65-year-old and another 63-year- old, both from Region Four (Demerara-Mahaica) and a 4141-year-old of Berbice. They died while receiving care at a […]