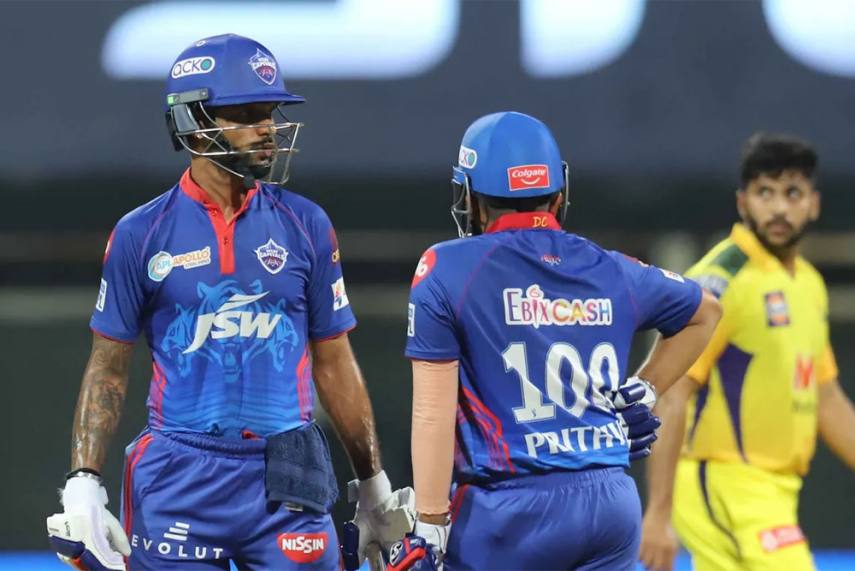 (CRICINFO) On a night of comebacks, Prithvi Shaw‘s return to IPL form trumped Suresh Raina‘s homecoming at Chennai Super Kings. The Delhi Capitals’ fast bowlers did enough damage with the new ball and the old to make sure the Super Kings’ fabled-already depth had to stretch itself – Raina scored a fifty himself – to get themselves to a strictly competitive total.

Shaw and Shikhar Dhawan pretty quickly took out any competitive sting out of that total with 65 in the powerplay, only a brief slowdown after, and a 138-run opening stand at over 10 an over. Dhawan played his part to perfection, getting off to a quick start to allow Shaw some time at the top and then carrying on at a high strike rate even after Shaw got out. These are two important ticks for Capitals’ plans.

All the talk going into the match was around the Super Kings’ batting depth, with Dwayne Bravo batting at No. 9, and it was to put to test immediately. The new ball swung for Chris Woakes and Avesh Khan, and they both bowled full enough to make use of it. Avesh got Faf du Plessis lbw, Woakes got rid of Ruturaj Gaikwad, and suddenly the depth didn’t seem to matter. But thanks to Raina and Moeen Ali, the Super Kings went from 7 for 2 at 2.1 overs to end up with 33 in the powerplay.

The depth does matter, though

However, the middle overs were unlike what Super Kings are used to. Especially when both the left-hand batsmen started taking on the offspinner, R Ashwin. It was mostly Moeen, though, with successive fours in Ashwin’s first over followed by successive sixes in his next. By the time Moeen got out reverse-sweeping Ashwin, he had set Super Kings on their way. Raina grabbed hold of the baton and ran at Amit Mishra and Ashwin. The Capitals were forced to go back to pace, but Raina welcomed Marcus Stoinis with two sixes to bring up his fifty.

Tom Curran and Avesh Khan, though, managed to slow Super Kings down enough before the death overs. Curran got Rayudu out with a slower ball, MS Dhoni played Avesh on for a duck. Add a Raina run-out in the middle with Ravindra Jadeja running into the bowler and turning down the second, and you had 38 runs in five overs starting with the 14th. It wasn’t just the wickets, it was good defensive bowling, handcuffing the batsmen. Sam Curran got the better of his brother Tom in the 19th over to provide Super Kings the finishing kick, but it was still below-par on a flat Wankhede surface.

Dhawan, Shaw must go on

Ricky Ponting might be in for some throwdowns to Shaw between games. Before the start of this IPL, Ponting revealed Shaw doesn’t like batting when out of form but is difficult to keep away from training when he is in the runs. And he has been in the runs for a while. However, Vijay Hazare Trophy runs came with no one watching. Shaw would have wanted to show everyone he was back. And he announced it with the second ball he faced, whip-pulling Deepak Chahar for a four.

Dhawan made the first big assault, though, hitting Sam Curran for a four and a six in the fourth over. Shaw joined the party in the fifth over, taking Shardul Thakur away for three fours. Shaw kept going, taking down the spinners after a couple of quiet overs just after the powerplay. Shaw scored at two runs a ball, allowing Dhawan the freedom to be at a more sedate 150 strike rate at the time he got out.

There were times when each one of them looked good for a century. Shaw needed 28 out of 51 when he holed out to a Bravo slower ball. Dhawan then kicked on to make sure there was no all-too-familiar late drama. The last 10 balls he faced brought Capitals 20 runs. He needed 15 out of 22 for a century when he was caught plumb by a Thakur yorker.  There was no drama indeed as Capitals got there with eight balls to spare.

Citizens/workers are hurting in this pandemic

Sun Apr 11 , 2021
Support Village Voice News With a Donation of Your Choice. —govt seems unconcerned Pandemic wreaking havoc Only those comfortable with the proverbial ostrich posture would deny the Irfaan Ali regime is mishandling the novel coronavirus (COVID-19). They have refused to take a national and holistic approach in combating this deadly disease, preferring to go alone at serious detriment to the […]