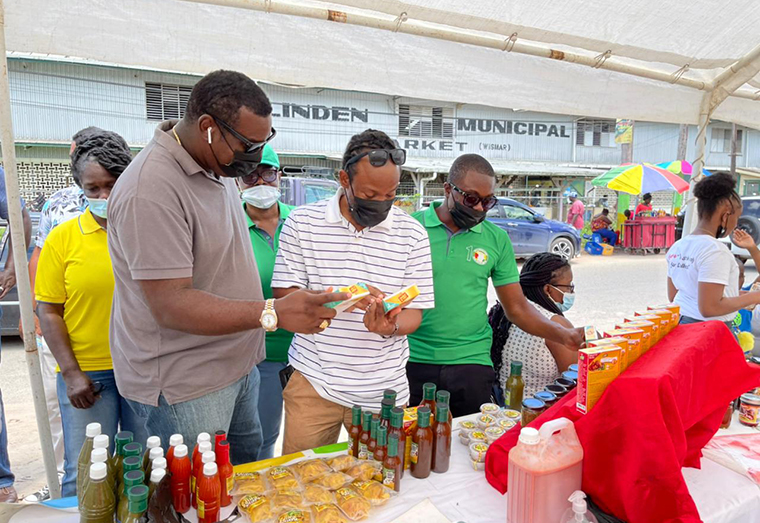 For as long as one can remember, Region 10 has had one of the highest unemployment rates in Guyana, and while major sustainable interventions to create new jobs have been deficient in the past, the ‘Farmers’ Market Day’ is anticipated to drive unemployment down in the Region.

Farmers’ Market Day is an initiative fully sponsored by the Regional Democratic Council (RDC) Region 10, that seeks to provide employment within the Region. It gives farmers and entrepreneurs from across district the opportunity and space to display, promote and sell their produce and products.

On the third Friday of the past two months, the Wismar Market Tarmac has become a hotspot for commerce, being packed with farmers, entrepreneurs and customers from all around the Region.

The initiative was initially launched in 2019 by the Agriculture Department of the RDC, Region 10 in collaboration with the Linden Mayor and Town Council under the theme, “Grow local buy local consume local,” but was at a standstill in 2020 due to the COVID-19 pandemic.

In an interview with Village Voice News, the Chairman of the Agriculture Committee at the RDC, Region 10, Mark Goring said that while the initiative is for all types of entrepreneurs, it was birthed to alleviate complaints made in the past by local farmers who complained of having to compete with retail vendors who purchase their produce from the coast.

“Farmers complain that whenever they plant they do not have sufficient market to put their produce out there because they have to compete with the coast, whereby persons go and buy greens cheaper and come back and retail it in Linden.

Goring told this newspaper that the event is getting bigger and better every month. What started off with just 20 vendors; now has over 60 entrepreneurs registered and participating.

Goring indicated that, at first, vendors were concerned as to if the initiative would be supported by the residents of the district which explains the small start.

But, the event has been receiving a huge outpouring of support by the residents and vendors, and is anticipated to expand out of the budget set for the event.

“The RDC provides tents, tables and chairs for the vendors and the last market day we did not anticipate so much persons would have responded so we had to get additional tents and tables so we are trying to work around that because it is evident that the event is growing bigger and will grow out of our budget,” Goring said.

However, despite the successes, Goring told the newspaper that the Government of Guyana has indicated that it cannot continue to not be able to fund the event in 2022, as such, the Agriculture Committee at the RDC, Region 10 looking for alternative options that will sustain the initiative.

“As the project gets prominent in the Region, we will wean the farmers into providing their own tents, chairs and tables or we will see if we can source them because the government already indicated that they cannot continue to fund the project into 2022. So we are looking for ways in which we can continue having this project in 2022. We will also meet with our vendors to explain discuss the situation with them,” Goring stated.

He said, “The government’s indication is a sad case because it shows that these people are not interested in the development of agriculture and the creation of jobs here in Region 10.”

Gittens added, “We have so much potential in the area of farming and to see them not want to fund something where we bring farmers from as far as Kwakwani and Ituni, to see them cut a budget such as that is a sad state of affairs.”

He noted that the RDC will continue to push for the programme to be funded continuously by the government. In the meantime, he is encouraging persons from around the country and even those in the diaspora to invest in Region 10, a place full of potential and much room for development.

While the event gives farmers the opportunity to sell without competition from retailers, it is also a networking even for the farmers, agro processors and investors who can collaborate to expand their businesses. The expansion of business will then result in the need for more employees and leads to the creation of new jobs.

Speaking with Village Voice News is the proprietor of ‘Mentore’s Nature Water,’ Lesa Mentore who participated in the Farmers’ Market Day for the first time in March. Mentore noted that she

made a decision to participate in the event because she saw it as a good outlet to promote and grow her small business.

She added that the event provided a space for her to freely advertise her business, exposed her new business to customers and boosted sales.

“The Farmers Market Day boosted sales for my business and it also helped me to improve the quality of my product because I also received reviews,” the young woman stated.

Meanwhile, the Agriculture Committee at the RDC hope to legalise the event and have it become a weekly event in the future depending on its sustainability.

The Committee is also looking to rollout many more initiatives in the future, including the promotion of in-land fishing, that will increase food security in the Region and lower the unemployment rate.

Sun Apr 11 , 2021
Support Village Voice News With a Donation of Your Choice. Dear Editor, Subsequent to the hearing of the Election Petition Number 88 on Wednesday April 7, sections of the media reported that GECOM proposed that the Petition be thrown out. While it might be true that Attorney-at-Law Astaphan, who is representing GECOM in this matter would have proffered that position, […]