I cannot help to register utter indignation and astonishment after reading a missive in “Letters to the Editor” Column, Kaieteur News penned by Mr. Vishnu Bisram and titled “Did Hamilton Green personify Divide and Rule?” In his diatribe on March 16, 2020 Mr. Bisram boldly posited that “the Guyana Defence Force opened fire on thugs,” a totally misinformed view that forces me to respond and set the record straight. During that period I was a serving commissioned officer of the GDF at the rank of a lieutenant. My troops were vested with specific responsibility of assisting the Police in the maintenance of law and order in Georgetown. That is why I can assertively state that on October 5, 1992 and the days that followed, the GDF did not or had reason to discharge a single round.

At 14:30 hours, October 5, 1992, I was deployed in Georgetown and was tasked with the duty of assisting the police in the maintenance of law and order. On the said day I engaged many disenfranchised voters who had in their possession slips issued by the Electoral Assistance Bureau (EAB) advising them of the respective polling stations where they were listed to cast their ballots. I vividly remember these citizens complaining upon presenting themselves at those polling stations, their names could not have been found. During efforts to persuade several protestors to disperse I was able to verify several authentic cases of disenfranchisement.

It is indeed unfortunate that someone as learned as Mr. Vishnu Bisram would choose to address legitimate protestors as thugs. One is only left to summarise because there are Black. This seems to be the norm for a few misinformed bigots who lack historical understanding of Black militancy. Notably, such writings fail to achieve good race relations which all patriotic Guyanese are desperately seeking. One can even venture so far and accuse Mr. Bisram of seeking to further divide an already deeply polarized nation.

Upon reading Mr. Bisram’s missive, I could only conclude that it takes a complete lack of values and compassion for him to think up, write and cause to publish a letter that only succeeds in distorting history while completely misinforming the uninitiated. I am, therefore, forced to regard Mr. Bisram in the category of our many politicians and so called social activists who have no shame about peddling lies and misinformation regarding the socio-political reality.

Therefore I call upon all responsible and patriotic Guyanese to ignore such unbalanced dogma, even as we attempt to unite and bridge the racial divide. Resist those who seek to divide us by peddling alternative facts; thus, maligning and demonizing section(s) of the population.

Wed Mar 17 , 2021
Support Village Voice News With a Donation of Your Choice. Police ranks on Tuesday participated in a one-day anti-Trafficking in Persons (TIP) workshop to better equip them with the skills to identify victims of this crime. The session was held at the GPF’s Officers’ Training Centre at Eve Leary, Georgetown, specifically for traffic ranks and patrol officers. It was undertaken […] 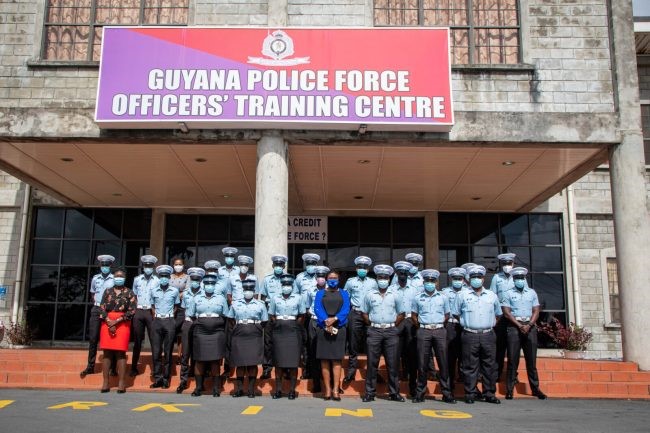