First Lady, Arya Ali on Sunday raised some $6M at a charity event held at State House to help purchase sanitary napkins for school aged girls in the Hinterland.

In January of this year, the First Lady officially announced the launch of her Menstrual Hygiene Initiative which seeks to end period poverty by making sanitary pads accessible to women and girls for free, the Department of Information said in a release.

The Charity event which was attended by Ministers of Government, the diplomatic corps, and leading members of the private sector, was the first of a series of fundraisers which have been organized by the Office of the First Lady. The donations for Sunday’s event amounted to $6 million – all of which will be used to purchase sanitary products which will be distributed to school-aged girls in the hinterland.

Because of the magnitude of such an undertaking, the First Lady has decided that project will be rolled out in phases, beginning with the provision of sanitary pads to the most vulnerable.

“The gravity of this problem was highlighted  in a casual conversation I had with a stranger who pointed out that  girls were forced to skip school routinely, and in some instances drop out permanently, because they could not afford sanitary products.

This is unacceptable. No girl should be placed in a situation in which she is forced to absent from or quit school because of her inability to afford sanitary products,” Mrs Ali told the donors at Sunday’s event. She noted that period poverty deprives girls of the very education which they need to grasp economic and other opportunities, while highlighting that it can result in harmful psychological effects such as impaired cognitive skills and social isolation.

To bring an end to this undesirable plight, the First Lady believes that there must first be an end to the denial of period poverty, after which conversations around women’s health must be normalized, even in spaces occupied only by men. “We must also disabuse ourselves of the idea that menstruation is exclusively a female concern. It is not. It is a concern for all because when girls are deprived of education and economic opportunities as a result of period poverty, it is the entire society which is affected, not just women,” she said.

She said that everyone – civil society, government, and the private sector – has a responsibility to that every single woman and girl benefit from safe and hygienic menstrual products and the dignity that this affords. As such, she lauded the efforts of the attendees who would have contributed financially, and challenged them to also raise their voices to end the stigma associated with menstruation. Speaking at the event, too, was Minister of Education, Priya Manickchand, who applauded and expressed deep gratitude to the First Lady for beginning what she hopes will be a national conversation with effective solutions.

Minister Manickchand is working closely with the Office of the First Lady to have the sanitary pads distributed to girls via the public schools and reflected on the taboo nature of the conversation in and around period and menstrual health. She announced that the Education Ministry will begin research to determine the impact of period and period poverty on education. “The Ministry will continue to support efforts which are aimed at ending period poverty and ensuring our girls and women have equal access to educational and other opportunities” the Minister said.

Wed Mar 17 , 2021
Support Village Voice News With a Donation of Your Choice. – PM tells PROSUR meeting Guyana remains concerned about economic and social impact of virus   Prime Minister, Brigadier (Ret’d) Mark Phillips, on Tuesday said that Guyana remains deeply concerned about the economic and social impact of the COVID-19 pandemic and the way in which it has reversed economic gains […] 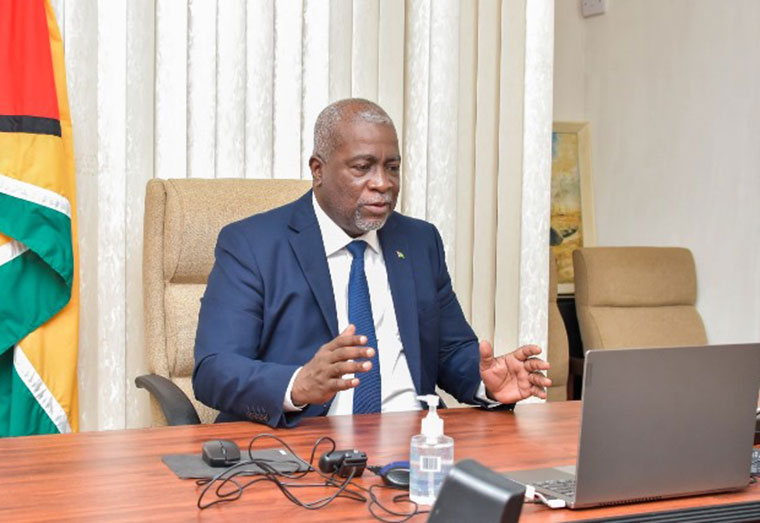