Government’s decision to reinstate disgraced Linden Hospital CEO, Randolph Small has sparked fresh protests by nurses at the institution with threats of an intensification of their actions if the administration does not budge.

Small on Wednesday showed up at the hospital one day after he was given marching orders over derogatory remarks aimed at the staff.
His presence at the compound sparked another round of protest, which forced him to leave hurriedly in the presence of police.

On Tuesday, Small was instructed by the Permanent Secretary of the Ministry of Health, Malcolm Watkins to vacate his position in light of derogatory comments he made about the nurses which sparked widespread  criticisms and calls for his removal. But the ministry reversed its decision and instead admonished Small to go back to the hospital and ‘behave himself’.

In the letter of reinstatement signed by the permanent secretary the ministry said further to the report for you to report to the Ministry of Health, the following guidance is provided. “The leadership of the Ministry, having had a frank discussion with you, has decided that you are to return to your position as the Chief Executive Officer of the LHC, effective March 3, 2021. 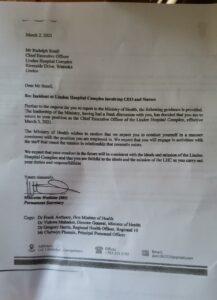 The Ministry wishes to caution that we expect you to conduct yourself in a manner consistent with the position you were employed in. We expect that you will engage in activities with the staff that mend the tension in relationship that presently exists.
We expect that your conduct in the future will be consistent with the ideals and mission of the LHC and that you are faithful to the ideals and the mission of the LHC as you carry out your duties and responsibilities,” the letter read.
Early start
On Wednesday morning the nurses who were in front of the CEO’s office since 06:00hrs chanted, “Wicked Rudy must go!” and “We demand respect!”

According to a representative of the Guyana Public Service Union, Maurice Butters, the protest will continue until Small is removed from his post as CEO of the LHC.

“Nobody in their righted mind would accept the decision made to reinstall Small as the CEO,” he added.

Butters who is also present at the ongoing protest told reporters that he understands that the call for Small’s reinstatement was made by someone in a higher position than the Permanent Secretary.
Also speaking with Village Voice News was the Vice Chairman of Region 10, Douglas Gittens who expressed his disappointment on the return of the CEO.

“We are seriously disappointed with the situation. We have these persons working in pandemic and they are dealing with stress already. Why should they have to deal with a situation like this where the head of the hospital is accusing them and disrespecting them.”

Gittens noted that he is present at the protest to ensure that nothing is done to the nurses and to show that Regional Democratic Council is in support of them.

It is alleged that during an interview done with a blogger, the CEO said that the “introduction of a  electronic time keeping system at the hospital is to help clamp down on egregious practices among LHC nurses who sign in for work abandon their posts by leaving clandestinely for late night trysts.”

This information was published in an article written by the blogger following the interview.

It is alleged that the CEO went on to say, “I intend to put a stop to this. We have some nurses who are accustomed to reporting for duty at nights…they sign in then they get away (and) go and sleep with their sweet man…(and) would come back in and sign out in the morning.”

In  a statement  Small admitted that he made the comments off the record during a casual conversation with the blogger after an interview.

Wed Mar 3 , 2021
Support Village Voice News With a Donation of Your Choice. …Linden Hospital CEO apologises for ‘sweetman comment’ Embattled Chief Executive Officer of the Linden Hospital Complex, Rudolph Small has issued an apology for derogatory remarks he made about staff at the institution. And even as he was sacked and then reinstated, the CEO has asked for forgiveness and pledged to […] 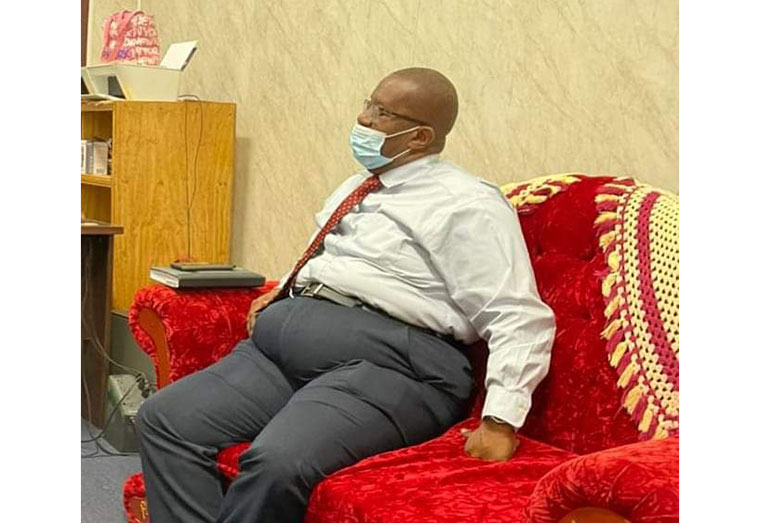