VENEZUELA’s current contention that the International Court of Justice (ICJ) has no jurisdiction to resolve the border controversy between itself and Guyana on the validity of the 1899 Arbitral Award, is not only illogical and erroneous but is in stark contrast to the interpretation it had of the Geneva Agreement when it was signed in February, 1966, Guyana said, in a compelling presentation to the Court earlier today.

In its virtual appearance before a panel of judges led by President of the ICJ, President Abdulqawi Yusuf in the case – Arbitral Award of October 1899 (Guyana v. Venezuela), Guyana submitted that the Geneva Agreement authorised the United Nations Secretary-General to decide which appropriate dispute resolution mechanism to adopt for the peaceful settlement of the dispute, in accordance with Article 33 of the United Nations Charter.

Guyana’s Co-Agent, Sir Shridath Ramphal and a battery of international lawyers, who appeared virtually, argued that it was on that basis that the UN Secretary-General deferred the controversy to the ICJ after the Mixed Commission (1966-1970), and Good Offices Process (1990-2017) had failed to resolve the controversy.

Globally recognized Legal Counsel, Paul Reichler, who formed part of the battery of lawyers that represented in Guyana, said Geneva Agreement bestows the UN Secretary General with the authority to place the controversy into the hands of the ICJ for final and binding settlement as provided for in Article IV (2) of the Agreement. This position, he said, was held by Venezuela in 1966 when it signed the Geneva Agreement.
In support of his case, Reichler pointed to the statements of the Venezuela’s Foreign Minister, Ignacio Iribarren Borges, in his address to the Venezuela National Conference in March 17, 1977 ahead of the ratification of the Geneva Agreement.

In his address, Borges had said: “Finally, in an attempt to seek a respectable solution to this problem I put forward a third Venezuelan proposal that would lead to the solution for the borderline issue in three consecutive stages, each with their respective timeframe, with the requirement that there had to be an end to the process: a) a Mixed Commission, b) Mediation; c) international arbitration.”

Borges, Reichler said, was keen on pointing out to the Venezuelan National Congress at the time, “that there exists an unequivocal interpretation that [the] only person participating in the selection of the means of solution will be the Secretary General of the United Nations and not the Assembly.”
The Legal Counsel submitted to the ICJ that it was Venezuela who had proposed that Article IV be drafted so as to ensure a definitive resolution of the controversy ultimately, if so decided by the Secretary General by arbitration or recourse to the International Court of Justice.

“There is thus no doubt, Mr President, from the terms of the agreement, the negotiating history or the contemporaries statements by the parties immediately following its conclusion that Article IV (2) was intended to assure that there would a final resolution of the border controversy; that the Secretary General was empowered to decide on the means of settlement to be employed, choosing among those listed in Article 33 of the Charter and that the parties understood and intended that if the Secretary General so decided that the controversy would be settled by the ICJ. This was Venezuela’s understanding of the Geneva’s agreement and of Article IV (2) in particular at the time it signed and ratified the agreement in 1966 that he Secretary General was empowered to decide on the means of settlement including recourse to the ICJ and his decision would be final and binding on the parties,” Reichler told the Court.

Reichler appeared on behalf of Guyana alongside Sir Shridath, Payam Akhavan, Philippe Sands and Alain Pellet – all international recognized legal luminaries, who, in a string of convincing arguments, submitted that the ICJ had jurisdiction to hear the case, and should proceed to hear the substantive matter.

In offering opening remarks, Sri Shridath told the ICJ that the case is of significant importance to the people of Guyana who are united in their defense of their sovereignty and territorial integrity of their homeland.
He said Venezuela’s failure to participate in the hearing will not affect the case. “It is unfortunate that Venezuela has chosen not to participate in these hearings. Undoubtedly, it would have been more helpful to the Court for both parties to appear to fully present their arguments in the first round and respond to each other in second. But at least the Court has not been left to speculate as to what Venezuela might have said had it appeared in this Great Hall of Justice”, Sir Shridath said while pointing to the Memorandum submitted by Venezuela in November, 2019.

Sir Shridath noted that it was after more than half of a century of an unsuccessful outcome, that the controversy, which erupted after Venezuela contended that the Arbitral Award was null and void, was referred to the ICJ for a final and binding settlement.
The hearing was conducted at the Peace Palace in The Hague with virtual presentations being done by Guyana.

Tue Jun 30 , 2020
Support Village Voice News With a Donation of Your Choice. The Ministry of Public Health has confirmed ten new cases of the novel coronavirus taking the total to 245. This comes after 26 tests were conducted within the last 24 hours. The Ministry is also reporting 114 recoveries which represent 47 percent of all persons who tested positive for the […] 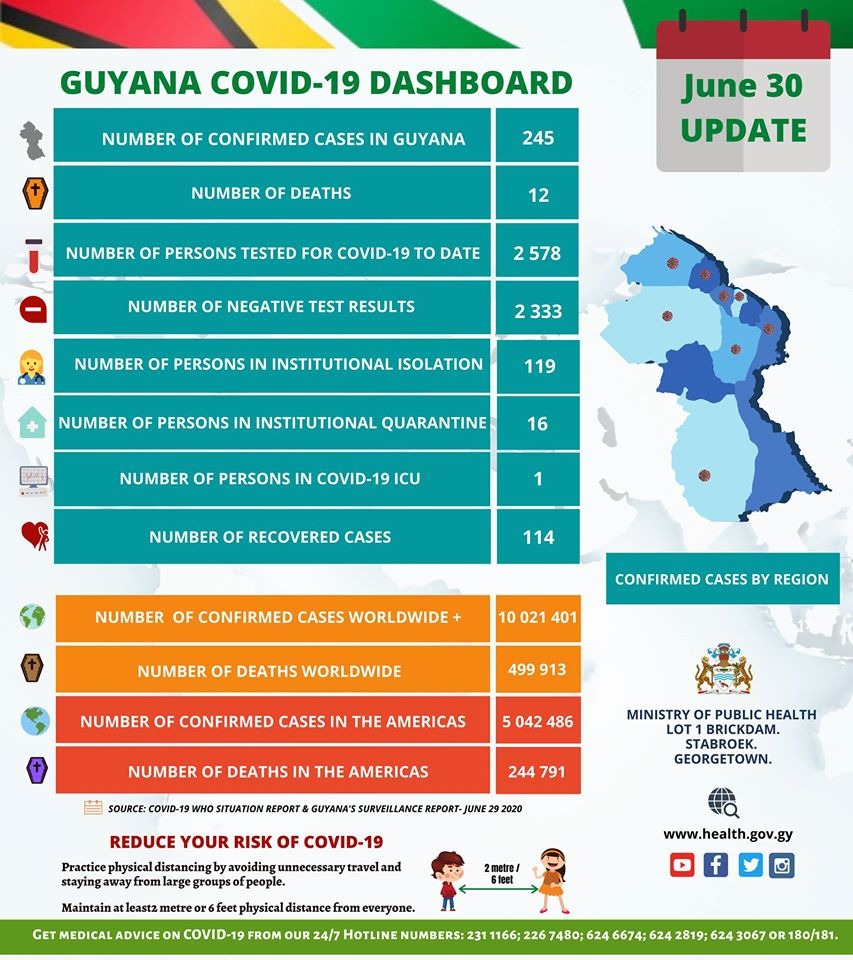